It’s a funny thing – what is it about a book that makes you grateful you’ve read it?  Some personal enrichment?  A feeling that you understand the character and maybe it helps you understand yourself – or spurs you on to overcome things in your own life?

I confess that books that fall in this category are often not ones I’ve read of my own volition.  Hilary Mantel’s Bring Up the Bodies, for example, I only read because it was a bookclub book – even though I’d heard good things about it and it was on my TBR list.  Way down my TBR list.   Jonas Jonasson’s the Hundred Year Old Man Who Climbed Out Of The Window and Disappeared was one I chose to read, and felt all the better for, since it is very life-affirming, and also funny in an off-beat way (and helped my grasp of 20th century history). 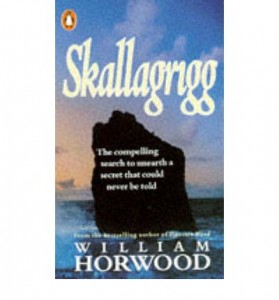 But the book I felt gave me most was Skallagrigg by William Horwood – possibly one of the saddest, but at the same time reaffirming stories, which gives you so much insight into the resilience of the human spirit and the capacity for human beings to inflict suffering on each other.  Skallagrigg is essentially about a spirit creature who will come to all those in need, but mainly to people with mental illness or disability.  It tells the story of two people with the same syndrome (I think it’s cerebral palsy but it’s never defined) but separated by about fifty years – light years in terms of societal understanding and care.

The trouble is, thinking about this post, is that although we no longer incarcerate and abuse our mentally ill people, we seem to be repeating the syndrome with our aged people in so-called ‘care’ homes.  I hope we’re putting an end to that too.

Skallagrigg was first published in 1987, which is strange since I thought I’d read it ten years earlier.  One review rants about it not having been published in the US.  It’s not in stock at Amazon UK (used copies only) and is possibly out of print. The Book Depository suggest trying AbeBooks, who do appear to have some second-hand copies.  The publisher lists it as Fantasy, which it most certainly isn’t!  I think I’d call it social history fiction, if there is such a thing.

Would you  like to hunt for it on your favourite bookstore and also click the “ask the Publisher for it on Kindle” button on Amazon, in order to get it back into the public eye?  Thanks.

I’m giving away one copy of Skallagrigg internationally, with no promise about the condition since I can only find used copies to buy.

Enter using the Rafflecopter below and note that the “Tweet” option also tweets Penguin Books (UK) asking them to reissue it – you could take out the UK if you want to ask Penguin Books internationally.