Summary: A modern day adventure as our protagonists search for Excalibur and the treasures it holds!

Continuing the adventure that began in Egypt a few months before in The Secret of the Sacred Scarab, cousins Adam and Justin Sinclair are hot on the trail of the second Stone of Power, one of seven ancient stones lost centuries ago. This stone might be embedded in the hilt of a newly discovered sword that archaeologists believe belonged to King Arthur: Excalibur.

However, their long-standing enemy, Dr. Khalid, is following them as they travel to Scotland to investigate an old castle. Little do they know there is another deadly force, the Eaters of Poison, who have their own mission to complete. Time is running out as the confluence of the planets draws closer. Can Justin and Adam find the second Stone of Power and survive? And why did Aunt Isabel send a girl with them?

Join Justin and Adam as they search not only for the second Stone of Power, but also for the Scroll of the Ancients, a mysterious document that holds important clues to the Seven Stones of Power. As their adventure unfolds, they learn many things and face dangers that make even their perils in Egypt look tame. And how annoying for them that their tag-along companion, Kim, seems to have such good ideas when they are stumped.

At the heart of this book is a brilliantly written, tightly crafted, well researched thriller starring Adam and Justin and their friends, outwitting fierce and dreadful foes in their continuing quest to discover the Stones of Power.

It’s the second of the Chronicles of the Stone series, and brings all sorts of mythology together in an interesting and believable conjunction.  In the first book, the Secret of the Sacred Scarab, Adam discovered the scarab stone that was the key to mastering all the others.  A shade of one ring to rule them all, especially as there are seven stones to be discovered.  In this book a seven pointed star makes itself obvious, and we are treated to a delightful illustration of it, complete with runes and symbols of chemical elements, which gives real geeks like me plenty to play about with.  At the end we are also shown a vision of the next quest, quickly followed by a kind of red herring detailing a whole load of Welsh mythical magic items  (I hope they’re not real, and that they are a red herring, since they are exactly the type of myth that Willoughby the Narrator would hate, and turn into a contrary tale).

Despite getting really into the main story, I was disappointed with the padded sub-plots in this book, and the old-fashioned  stereotypes that made up the secondary characters. The setting confused me by wavering between the twenty-first century (as stated) and something Margaret Thatcher would find cosy.  The plot finished about three chapters before the end, with, I thought, far more ‘explanation’ than most readers, especially boys keen on myths and legends, would need.

The overall concept of the book, and of the series, is first class. The detail of the mythology is amazing. Ms Ingram writes brilliant action sequences – scary, tight and exciting.  I hope the later books in the series live up to her promise.

The Search for the Stone of Excalibur by Fiona Ingram

I received this book to review as part of a Mother Daughter Book Reviews hosted Blog Tour.  Ms Ingram is a fellow BookElf.

About the Author: Fiona Ingram

Fiona Ingram (B.A., Hons. (Natal), M.A., (Wits)) was born and educated in South Africa, and has worked as a full-time journalist and editor. Her interest in ancient history, mystery, and legends, and her enjoyment of travel has resulted in The Secret of the Sacred Scarab, the first in her exciting children’s adventure series—Chronicles of the Stone. The second book is entitled The Search for the Stone of Excalibur, a treat for young King Arthur fans. She is busy with Book 3 entitled The Temple of the Crystal Timekeeper.

The Search for the Stone of Excalibur Blog Tour Schedule (2015) 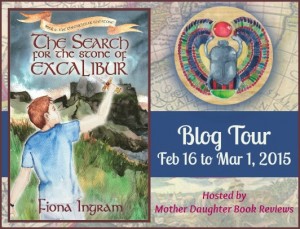 Heart of a Philanthropist (Review)

How to enter: Please enter using the Rafflecopter widget below.

Terms and Conditions: NO PURCHASE NECESSARY TO ENTER OR WIN. VOID WHERE PROHIBITED BY LAW. A winner will be randomly drawn through the Rafflecopter widget and will be contacted by email within 48 hours after the giveaway ends. The winner will then have 72 hours to respond. If the winner does not respond within 72 hours, a new draw will take place for a new winner. Odds of winning will vary depending on the number of eligible entries received. This contest is in no way sponsored, endorsed or administered by, or associated with Facebook. This giveaway is sponsored by Fiona Ingram and is hosted and managed by Renee from Mother Daughter Book Reviews. If you have any additional questions – feel free to send an email to Renee(at)MotherDaughterBookReviews(dot)com.

Book Review and Blog Tour : The Search for the Stone of Excalibur

7 thoughts on “Book Review and Blog Tour : The Search for the Stone of Excalibur”