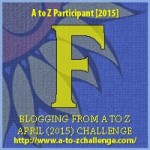 It’s a place of legend, and much visited by tourists as far back as the eighteenth century, when the legend of the giant Fingal – or Finn Mac Cool,  the Irish hero – was in popular circulation.  I’ll go into the legend some more tomorrow, when we visit the Giant’s Causeway.

The cave is famous for its basalt columns, formed by the cooling of magma at the right rate to create the hexagonal columns – and hexagonal rock pools.  Just why the magma was there, and extruding from the earth’s crust, is due to a volcano located on what is now the Ardnamurchan peninsula.  This volcano has left its mark all over the British Isles, with lines of magma, sometimes forming sills or dykes running right the way through the islands’ structure for hundreds of miles (for more info see this wikipedia page and maps).  Britain is a geologist’s paradise as it has such a variety of rock formations and such different ages of rocks from northwest to southeast.  It’s why we have such varied countryside.

The pictures of the cave above are mine, taken on one of my many visits using the wonderful Turus Mara boat service from Ulva Ferry on Mull.  As we approach the cave from the sea he always plays Mendelssohn’s Hebrides Overture – popularly known as Fingal’s Cave – it makes a wonderful accompaniment to the exploration of the 72 ft tall, 270 ft deep (into the island, not downwards) sea cave. 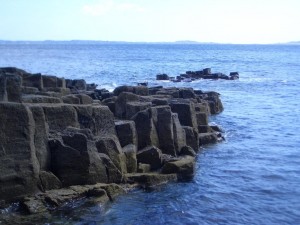 … come back tomorrow to see where they lead!