P is for… pahoehoe and for pyroclastic flow 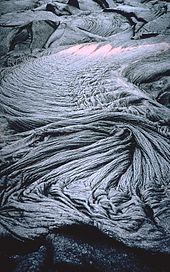 Pahoehoe (pa- ho-ee ho-ee) is possibly my favourite Earth Sciences term – it is a type of lava that forms great masses that look like rope, so also dubbed ‘ropey lava’.  I seem to remember that it mainly forms under water, where the outside cools relatively quickly.

If you like the film Master and Commander: The Far Side of the World, you may remember Paul Bettany as Stephen Maturin recovering from his bullet wound on the Galapagos, and walking across great round sheets of rock that looked like coiled rope – that’s pahoehoe. (picture from wikipedia) 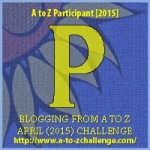 Pyroclastic flow is something else related to lava – possibly the most horrifying aspect of a volcanic eruption that I’ve ever heard of, and it’s responsible for the destruction of Pompeii but the preservation of all the casts of people and animals and everything else.

Basically pyroclastic flow is an incredibly fast outburst of molten rock and dust that kills everything it covers, because it’s about 300 degrees Celsius – and it covers at 100 miles an hour.  And because of that, we know so much about Pompeii… so I’d like to share a great book with you…

Book Review: The Shadow of the Volcano

This was the last book I read in 2014, and it was the perfect end to the year (and antidote to too much Christmas dinner).  I apologise to the author for hanging on to the review for so long.

In book 5 of the Shadows from the Past series, twins Jemima and Joe, friend Charlie and superstar Max the Tonkinese cat are whisked off to the port at Pompeii.  Fortunately they have picked up enough history to know that it’s the worst place anyone could be on 24th August 79AD.  So, arriving in mid-August and being mistaken for slaves, they have little time to work out how to get people to leave the city – and little chance to do so.

I am predisposed to enjoy any account of the destruction of Pompeii, since it grabbed my imagination at an early age, and even more so when I found myself translating Pliny’s eyewitness account direct from the Latin in my fifth year (exam year) at school.  I still find it hard to describe the thrill I experienced, reading something that old, in the original language.  In my memory he wrote it sitting at his breakfast table as the horrific events happened across the bay, but Ms Leighton-Porter reproduces some of his translated writings in an appendix to this book, and it’s not the bit I did!  As she took the opportunity to honour her Latin teacher, I’d like to mention my own, Miss Hamilton, a kind and studious woman who is probably nearly a hundred now, if she is still with us.

Back to the book: Jemima and Joe find friends and more influential slaves in their own household, while Charlie gets a more prestigious place.  Max becomes an alley cat of sorts, and has some amazing adventures of his own.  That cat needs a book to himself.  Oh… check out Max’s Arabian Adventures and Max’s Christmas Adventure!

What marks this book out as special is the level of detail about daily life in Pompeii, which is interesting in itself, yet with enough plot and sub-plot to capture the attention of the reader.  There is plenty to stir the nerves and make you wonder ‘will they, won’t they’ before the inevitable eruption occurs.

You’ll have to hope they got out in time in order for there to be a book 6…  This is another superb episode from Wendy Leighton-Porter!

I bought this book in September, along with a few more in the series, as I’m completely addicted to it.  I’m very honoured to be involved in the BookElves with Wendy.

Pahoehoe, pyroclastic flow and The Shadow of the Volcano

16 thoughts on “Pahoehoe, pyroclastic flow and The Shadow of the Volcano”