The trouble with not doing your book review straight after reading the book is that sometimes you don’t do it for months.  And that means sometimes you’ve forgotten what the book was about.  The up side of this, is that the memories that DO come back when you work on it, are likely to be the things you want most to talk about.

The victim of my memory here is: 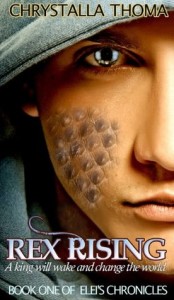 It’s scifi, written by a Camp Nano cabin-mate (or so I recall, as there is no way of double-checking this) and it’s a really exciting read.  I could remember the cover, and the story was a blank until I got a very strong visual image of Elei struggling through this strange town, ruled by a female cult (hmm, there’s an idea!) which I pictured as somewhere like Cyprus, with hot dusty streets underneath a towering red cliff.  Maybe it’s not like that at all, just my take on it.

Elei is on the run, and injured.  It’s all very confusing in his own mind: he was protecting someone, who was assassinated as she left the flying machine he was driving.  She had saved him from a dire fate.  She had said something to him he didn’t understand.  He knew he had to get out, to another island, away from the people who killed her.

For a lot of the book we are with Elei as he runs, trying to find the answer to a miniscule bit of information he was given.  We learn as we go, but we also know we are being hunted.  Thomas’s writing really gets you involved, and as I write this, I recall more the feelings than the actual plot.  It is powerfully written, evoking both emotions and images – and I don’t remember reading an exciting story giving me such a strong sense of place for ages.

Highly recommended, and the first of a series, the Elei Chronicles, so I must find the next!

In the Shadows of the Mosquito Constellation by Jennifer Ellis 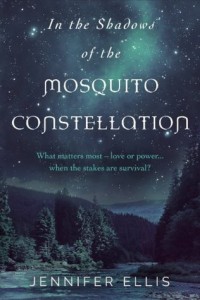 I finished this not long ago, so no problem with my memory!  Again, a scifi, but this time a dystopia after the Peak Oil crisis means there isn’t any – not in North America, anyway, or not available to anyone that needs it.  Governance has broken down, as has all normal systems of consumer supply and demand.  The lucky few who saw it coming retreated to their farms, and tried to become self-sufficient, but this isn’t easy when there are displaced people looking for food, shelter, clothing and medical aid.

Ellis’s world revolves around a woman whose environmental credentials irritated her husband, a vainglorious political animal of the type I hate.  So does she, really, but he’s very charismatic, and that’s why she fell for him at college, rather than his entirely decent and much nicer twin brother, who is a vet.  So, the husband is running their commune, and leaving the wife to do far more work than anyone else, because it’s hard being self-sufficient, especially in a dystopian world.

This is beautifully detailed scifi, the science of long-wave change in response to a social disaster, but it manifests itself as a complex story creating tension and heartache, as every member of the commune has a story to tell, different motivations, and widely varying ways of making the best of their situation.  It is a little heavy on personal relationships, and very soul-searching, which early on I found somewhat irritating.  However there is also plenty of action, and the developments that unwind through the novel are believable and well-crafted.  It turned into one of those books that you just ache to get back to, but it’s quite long!

Double Book Review: Rex Rising and In the Shadows of the Mosquito Constellation

4 thoughts on “Double Book Review: Rex Rising and In the Shadows of the Mosquito Constellation”