Welcome to a fascinating series and its author today.  I was sorry I couldn’t fit in a review of this book, although it’s only a short story, so maybe I should.  But Ms Thompson did stop by to give me an interview, which I hope you’ll enjoy.  First, the book’s details – you’ll see why I was attracted to it!. 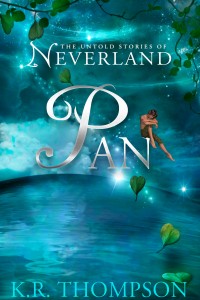 Neverland has always been their sanctuary—until now.

Magic is dying in Neverland and only one pixie is brave enough to search the human world for someone to believe. Tink finds a desolate boy flying in the night, peering in windows, searching for the life he once knew. But can she convince him to abandon his quest and save Neverland?

Discover the untold story of the boy destined to become Peter Pan.

At least the boy was taking his task seriously, the pixie decided, watching him raise up on his toes in an effort to gain a better look inside one darkened, upstairs room. Some guardians were lazy, but this one was not, which was just as well, she noted, as the small, shadowy figure of a child exited through the window and joined him. A few seconds later, the two flew off into the night sky. The children of humans could be a handful—the ghosts of them even more so, especially when they realized they were no longer among the living. It only made sense to appoint another child to deal with their sorrow and accompany their spirits to the other side.

The source of her attention currently gone, the pixie idly kicked into the open air. Small bits of dust sprinkled each time her feet touched the open mouth of the monster she’d been making a seat of. She glanced down, noticing his bottom teeth now sparkled like gold in the moonlight, giving him an even more ferocious look.

The poor thing looked dreadful, with long curling teeth and bulging eyes—nothing at all like her own pretty, golden self. She gave him a bright smile. Likely, that was the only kindness ever given the monster forever stuck up here on the edge of this roof, so she reached down and gave his hard cheek an affectionate pat before turning her attention back to the sprawling town below. After all, she hadn’t come to save this monster. She’d come for the boy and soon he would need her—but not nearly as much as she needed him.

K.R. Thompson writes paranormal stories with a bite and fairy tales with a twist. An avid reader and firm believer in the magic of books, she spends her nights either reading an adventure, or writing one.

She still watches for evidence of Bigfoot in the mud of Wolf Creek.

So, Ms Thompson (or can I call you KR?), why did you choose Neverland to explore in your writing?

I’ve always loved the idea of Neverland growing up. I was a huge fan of Peter Pan, but always wondered how it came to be and how the characters arrived there and never left, especially the pirates. One thing led to another, and before I knew it, I began writing these stories.

Who is your favourite Neverland character?

Captain Hook, without a doubt.

What was the trickiest thing you felt you needed to get right in Pan?

Pan was tough to write. The hardest part was explaining why Peter began acting the way he did toward the end. The change in his personality carries over into the rest of the series, so I wanted my readers to know why he was acting the way he was.

So in a way, it was the back-story.  If that wasn’t right, then none of it would make sense.  It’s an enjoyable thing to write, though, isn’t it? What do you find most difficult about writing, generally?

Fixing plot holes that you didn’t realize were there. Some of them can change your story entirely from the way you first imagined it.

Oh, yes.  Although I tend to go with the version my characters write.  Talking of writing…how do you relax?

Relax? What’s that?  Just kidding, I love spending time with my little boy. He’s constantly learning, so it’s amazing to see the world through his eyes. I think I learn more from him than he does from me sometimes.

I can see why Pan is an attraction then, if you have little boy to tell stories to! Thank you very much for taking time on you schedule to visit me today.

Thank you so much for having me.

This Tour Was Organized & Hosted By: