I’m still catching up with my book reviews, and these were read before starting the Tackle TBR, although to be fair, neither had been on my TBR for long.  Noelle Granger’s Death in Dacron Sail had been on the list since she released it earlier this year, but it was never far down, and Betrayal of Trust was my bookclub read for September, so we got it at the end of August.  Let’s start there…

Betrayal of Trust by Susan Hill 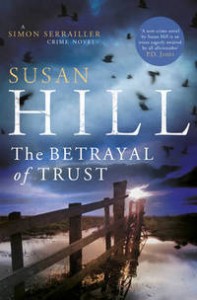 When I picked up this book, I realised that Susan Hill was responsible for the Woman in Black, so I was a little nervous.  Would it be so scary I couldn’t read it?

Well, Ms Hill is a master of tension, and of dropping threads around so you realise you’re becoming enmeshed.  There are lots of people whom we’re introduced to, but mostly slowly enough to work out who’s who, but wonder about their relevance to the two bodies that have been found in shallow graves washed down from the moors in a landslide during heavy rain.  Simon Serailler is our detective, and this is number 5 in his series, and I did lose track of his family connections from time to time, but the rest of the cast was beautifully detailed and I mostly kept up!  One part of the plot was fairly well flagged up, although maybe it was just my cynicism about beautifully marketed opportunities on the internet, but for most of the rest of the threads I was either half a step ahead or behind the detective.  It’s pacy, heartbreaking, and a great read.  I just felt that it ended abruptly, with too many questions unanswered.  Maybe she felt they were part of the series, but I felt dumped.  So I docked her one star on my Goodreads rating, and finally decided to demote the Cuckoo’s Calling, our previous month’s book, to three stars as it’s nowhere near as good as Betrayal of Trust.

Death in a Dacron Sail by Noelle A. Granger 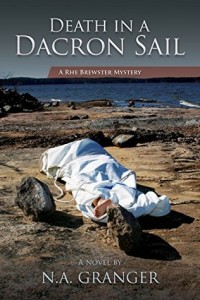 Noelle is also a master of tension, and this time she’s putting her heroine, Rhe Brewster, through all sorts of physical privations as she is swept up again in the discovery of a body, and her husband objects strongly to her involvement in police work.  I got quite upset by all the difficulties Rhe had to face on a personal level in this story, and I suppose the outcome was inevitable, but that doesn’t mean to say that I enjoy the marriage difficulties both of my best friends are putting their heroines through in order to maintain law and order in their isolated rural corners of the USA.  The plot of Death in a Dacron Sail is excellent, there are some lovely diversions to keep you guessing, neatly wrapped up, and altogether it’s an exciting and engrossing story.