This is part of a tour from I Am A Reader, and updates my review of 2013.  Stop by tomorrow for my review of the latest book in this exceptional series.

It’s 2077. There’s no apocalypse, but some things are different. Things like the weather, the internet, and food. In twelve-year-old Clare’s world, blueberry is just a flavor and apples are found only in fairy tales.

One day Clare meets Ana, who teaches her about seeds and real food, despite suspicions that such actions are illegal.

When the authorities discover the children’s forbidden tomato plant and arrest their mother, Clare and her brother flee. Clare has heard of a place called “The Garden State,” and with their bikes, a little money, and backpacks, the children begin a lonely cross-country journey that tests them both physically and spiritually.

Will they succeed in their quest to find a place of food freedom? And can they, only children, help change the world?

The Green Resource Investigation Machine was formed thirty-five years ago in an effort to codify and streamline food production in the United States. At the time, most people bought food from larger and larger grocery stores, or “supermarkets” as they were often called.

Originally, food had been grown by individuals and eaten according to the season in which it ripened.

She was having a hard time understanding what she read. How did seasons relate to food? What did “ripen” mean? What did it mean to “grow” food? She continued to read.

Some people grew extra produce to sell and brought their excess “to market.” Hence, the later term, “supermarket.” The supermarkets gave way to what are currently called “Stores.”

The old way of growing, selling, and preserving food was inefficient and cumbersome. It required people to own land and learn all aspects of food production. It wasn’t economical, practical, or safe. With the scientific breakthroughs of the late twentieth century, researchers were able to genetically modify seeds, enabling plants to resist disease, insects, and weeds. Techniques were introduced making it possible to grow more food on less land, with less labor, for less cost. Large companies eventually won the right to patent seeds, which had previously been a part of the public domain. The “owners” of the seeds eventually became a part of government policy making.

One of GRIM’s main tasks today is to keep track of subversive elements who work against the government’s official food policy: anarchists, environmentalists, and seed savers.

Clare gasped. Seed savers. Is that what she was now? A seed saver? She had been warned. The old woman who entrusted her with the seeds told her she had to be brave.

She hadn’t really believed her. How could she? Who would believe something as tiny as those two seeds could be dangerous?

“I haven’t been this in love with an individual young adult book since Lois Lowry’s The Giver… 221 pages of exciting young adult goodness! I devoured it, and it was delicious.” -Anakalian Whims Book Blog

“I highly recommend this book for tweens and teens who enjoy reading the dystopian genre and who are looking for a non-violent and thought-provoking story.” – Renee at Mother Daughter Book Reviews

When I first reviewed this book I was uncomfortable about what I saw was the use of religion in getting the message across.  But it was the only safe way that Ana could pass on her messages and supply information that kids could access to use for her teaching.  As I said at the time, teachers could use other religious texts for the same purpose; it appears that all religions have teachings within them to look after the land which provides its fruits for us to eat.  So why has a corporate world taken over the means of food production?  Frankly, because we’ve let them, and continue to let them by allowing international law to raise trade over safeguarding our planet [Ref TTP and TTIP].  Ask kids today where their food comes from, and they will say ‘the supermarket’.  Some are appalled that their carrots have grown in ‘dirt’.  Meanwhile we are stuffed with chemicals that are unproven in combination with all the other chemicals we are exposed to.  Yes, they are thoroughly tested (often on animals) but only in sterile conditions, one by one.  Food grown in organic soils may not produce as much en masse for the agrobusinesses, but that is because they use different principles, and feed more people with more variety – oh yes, with less profit. 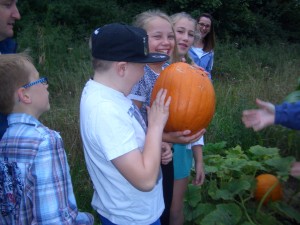 So having thrown all my personal beliefs and biases into the paragraph above, I will just say that this is a really exciting book, an adventure mystery that turns into a race to escape GRIM and find freedom from the clutches of the state.  If it prompts a few more kids to sow some seeds and find the wonder of a pumpkin growing from it, so much the better!

S. Smith grew up on a farm with a tremendously large garden. She maintains that if you can’t taste the soil on a carrot, it’s not fresh enough.

As an ESL (English as a Second Language) teacher, Ms. Smith has enjoyed teaching students from around the world.

Smith is a member ALLi (The Alliance of Independent Authors) and saves seeds for her local seed bank.

She gardens and writes at her home in the beautiful and green Pacific Northwest where she lives with her husband, two children, and two cats.

5 thoughts on “Review and Blog Tour | Treasure by S. Smith”