At the beginning of April, I got a surprise email from Goodreads.  No, it wasn’t a comment, or an update, or a new giveaway notice, not even a newsletter.

It was an email from Otis and Elizabeth Chandler, the founders of Goodreads, congratulating me on becoming one of the top 1% of reviewers on Goodreads, and helping them to get closer to their 50 million reviews milestone.  Apparently I’d written 246 reviews since I joined in January 2012. They gave me a nice  Goodreads 1% badge to celebrate.

The first review on Goodreads was by Otis Chandler, of Bill Bryson’s A Short History of Nearly Everything (2006).  The most reviewed title to date is The Hunger Games by Suzanne Collins with just under 150,000 reviews! Apparently 37% of all ratings are 5 stars.  They’ve made a nice infographic on their blog here.

I expect a lot of you received this award too, but I’ve not yet seen anyone else talking about it.  I may read the wrong blogs, of course.  I added the award to my NetGalley profile, in case it helps publishers pay more attention to my requests!  I only joined NetGalley because of the Decanting a Murder blog tour (see Saturday’s post), but despite my huge TBR, I’m now looking more at that, partly to help me explore new authors who got a publisher. I hope that will help me improve my writing.

It also made me think more about my reviews.  It’s a personal thing, and whilst (using a phrase from Steve Lothian) I don’t claim to be a professional reviewer, I suppose the more I do, the more I need to support my views, rather than just expressing a personal opinion on my blog. If I want good reviews on Goodreads and other public sites, I’d better make sure my own are too.

At present I seem to do three types of reviews:

There is also the difficult review, when my formal type does not cover much critique.  If reviewing a book I try to present it fairly, and recognise that sometimes either insider knowledge, or issues of style (and sometimes different standards in language and editing) give me problems. As with school reports, the reader should always notice what is NOT said.  Reading between the lines is an expert skill, and one that we all need to use, especially in this digital age.  In the words of a friend of mine who was in the public eye – if you can’t say something nice, don’t say anything.

You can debate the wisdom of not saying anything in a review. Some reviewers are well-known for their devastating decomposition and destruction of the best and brightest of works, in all artistic endeavours. That’s just not me.  And it’s probably not for any author, especially a self-published one.  But you still need to be fair, and consistent in your approach, I think.

Talking of which – I have a huge backlog of reviews to post here and to Goodreads and Amazon, which I will catch up on in the next few months. 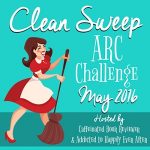 It’s partly due to my Clean Sweep Challenge.  I’m now on my fifth book of the month, concentrating on books I had from the publisher and/or pre-release or early release copies gifted in some way.  You can see my short reviews of them in the Clean Sweep Challenge post from 1st May.  On Wednesday there’s a Twitter Party (starting at 7.30 pm EST, which means I’ll be asleep by then) and on the 21st there’s an all-day Readathon, which for me will be weather-dependent!  I’m enjoying this focus on a certain type of book, and by accident it’s given me an idea for a Reading Challenge for next year, called the Go West Reading Challenge – watch for more information in November or December!

On reviewing books – and a Clean Sweep update

10 thoughts on “On reviewing books – and a Clean Sweep update”