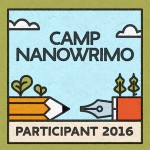 I finished Willoughby the Narrator on Monday.  It was great, since on Sunday I when I finished writing, I realised what needed to happen to get to the end of the book, left myself a note and wrote the last chapters the next morning.  It finished at 54700 words, which is a large number for what is supposed to be an older children’s book.  I’m not sure that it is a children’s book, but I’ll have a look when I’m editing it to make sure there’s nothing there that would make it NOT a children’s book, if you see what I mean.

Then I started on book 8, The Princelings of the North, with a Prologue of something that is implied near the end of book 7, and as I’ve mentioned before, is what the short story written in 2013, X marks the Spot, is all about.  I think this one should hit the spot for a children’s book… and then I wonder exactly how dangerous it is going to get.  But then, danger shouldn’t be a problem, it should add to the excitement.  I’m a quarter of the way through my target word count for it already, as you can see by the progress bars below right.

We’ve got a busy weekend at camp, with sports day, a party and two more sports tournaments on Monday and Wednesday.  I hope we get a campfire as well, since last week’s was washed out.

I hope you enjoyed last week’s excerpt.  Here’s another short bit from near the end of Willoughby.

Excerpt from Willoughby the Narrator (2)

Willoughby is hiding in a secret passage in Castle Vexstein, home of the evil Lord Smallweed

“Clear the court!” Smallweed announced, and everyone filed out.  I stayed put behind the peephole. This looked like unusual business.

One of the figures at the door came in; it was the vacuum post operator.

“Ah, you snagged the latest message, then. Good.”  Smallweed practically licked his lips.  My heart sank.

He opened the pod, took out the message and read it, showed it to his aide, who raised an eyebrow.

“Do you know when it was sent?”

“Soon after I closed the morning session, my lord.”

“Addressed to King Fred, but unsigned.  Well, well, well.  King Fred is into spying now, is he?  That’s a turn-up for the goody two-shoes.  ‘Going back today’.  Probably not worked out what we’re mining, then. Double the guard on the mines, watch out for interlopers.  If you catch one, take him to the second level down.”

I hadn’t checked out the second level down, but I suspected it might contain the worst kind of imprisonment. I decided to keep a ninja invisibility thought over me, and started to feel my way into it.

The vacuum post operator left, and the individual who had waited inside the door in the shadows came forward. Smallweed got up and sat with him just along from me, so I couldn’t get a good view of the newcomer.

“I thought I’d be civil, and inform you I’m leaving. But first…”

I screamed as a blast of thought seared my brain. I was tardy in seeing it coming and snapping Nimrod’s shield up.  I blocked the worst of it, but it still hurt, and I dropped the invisibility thought completely.

“Fred’s spy, eh? Thank you. What do you mean by leaving?”

I desperately tried to hear their conversation as I kept the shield up and at the same time listened for people entering the passage, wondering which would be the best way to leave.

“I believe there is a nice castle in the east of the continent that needs a new master.  Some place called Poenari.”

“So you’re leaving Deeping in the hands of the kid.  Well, I’m sure he’ll be happy with my guidance.”

“Er, no.  I’m happy for you to take over Deeping and do what you wish with it.  Kevin is out of the way.  Well out of the way.” His laugh was not a pleasant one.

“You’ve killed him?” Smallweed might have been asking whether he’d planted corn.

“No, I thought that beneath me.  He might survive, if he has enough wits, but I doubt it.”

I heard footsteps near me and ran on, losing touch with the two lords. I found an entrance panel, and took it, sliding it shut and looking for some way of keeping it shut, but failing.  I was on the west walk of the fourth level, and the sun was low.  I didn’t realise it was so late.  Lots of shouting behind the wall showed that the sunlight had been seen in the passageway.  Now I could hear soldiers running; I turned and saw them coming from the other direction too.  I looked up, and saw a window, so I sprang for it, caught it with my fingertips, and swung myself onto the wall, running upward for my life, swinging off bars that crossed other windows, and onto a balcony.  I slipped inside.  It was a bedroom, a sumptuous one, with a frightened girl tied to the bed.  She looked wide-eyed at me and I hushed her.  I checked the door; it wasn’t locked.  I went to open it, and she called ‘no!’.

“Why not?” I whispered, running to her and releasing her bindings.  She rubbed her wrists thankfully.

Despite her warning, I put my head out, also projecting an aura of invisibility.  I didn’t like what I saw.  I headed back to the balcony, looking for an escape route, but there was nothing except to go back down the way I’d come, and the walkway was lined with guards looking up at me, some holding bows.  I went back to the girl.

“Is there any other exit?”

She shook her head.

The door crashed open; Smallweed rushed through, followed by Colman and several guards.

“After me!” said Colman, and leapt towards me, opening his mouth and displaying his fangs.

I took one look at them, decided I didn’t want to be bitten by a vampire, and took a run at the balcony.

Leaping into space from high castle windows was getting to be a habit.  I didn’t know whether I’d be so lucky a second time.