This month’s question from Mike d’Agostino, originator of the Question of the Month bloghop is:

“What’s a decision you’ve made in the past that you know, logically, was the right decision to make, but which you still feel guilty or regretful about?”

I’m with Frank Sinatra on this one: “Regrets, I’ve had a few, but then again, too few to mention…”

I’ve said at times that I’ve sometimes regretting not doing something (losing out on an opportunity which might have been enjoyable, or led to Great Things), but I’ve never regretted anything I’ve done.  It does occur to me that while that works for me, as I don’t step lightly out of my comfort zone, as a message for teen boys it might need some tempering.  I was talking to our youth group informally when I last said that.  Hmm.  They’re a pretty level headed lot, though.

The one thing that falls into the category in the question, though, was making one of my team redundant in the 1980s.  If Chris reads this (and she or her husband may see this on Facebook), I always regretted not fighting much, much harder to keep you during that time we had to make a lot of staff redundant.  So yes, I feel guilty about it.  This is tempered by the fact it pushed you onwards to get a much better job and go forward in your career at the level you so richly deserved.  So as Voltaire put it in Candide: “Everything for the best, in the best of all possible worlds.”  And in case you think it’s very unlike me to read Voltaire (and you’d be right) I learnt that from Harris in Sharpe’s Sword and the Bernstein musical Candide!

The Problem with Peggy

Someone else who might be having a few regrets, but is determined to make sure other people don’t, is Big Al, in Skunk Corners.  Rebecca Douglass is ready to launch the third of her delightful and exciting stories about this engaging middle-of-nowhere community.  I imagine it dusty, with redwood trees and sandstone cliffs, and a creek running along one side that dries up most places in summer.  There are scattered houses, and few buildings clustered in the middle including Tess’s saloon, Al’s schoolhouse, the bank, and the library – where the Ninja Librarian hangs out.

Here’s my contribution to the draft blurb debate, and the nearly finished cover! 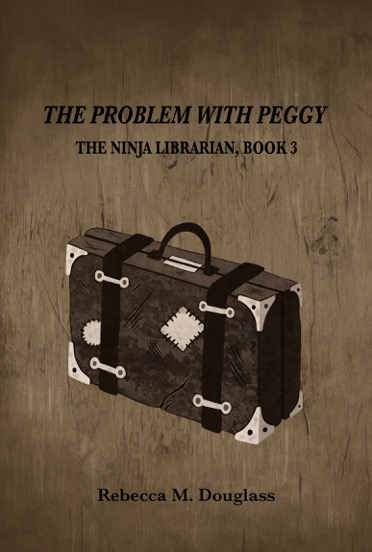 The Ninja Librarian’s back in town, school’s out, and all’s right with the world…or is it? Big Al may be looking forward to spending her time swimming in the creek and wandering the hills, but Peggy’s looking forward to a life of drudgery. If Al can’t find a way to sway her Pa, the brightest kid in Skunk Corners is going to take drastic action.

With a mystery from the past haunting one of the houses creating the biggest threat yet to the town, Big Al’s going to be kept busy this summer, and not just with practising her moves for the Ninja Librarian.

Watch out for more news of this excellent book shortly!

And if you’d like to see more of the QOTM participants replies – jump about with them here:

The Problem with Peggy & October #QOTM

14 thoughts on “The Problem with Peggy & October #QOTM”