Welcome to this year’s Deja Vu Blogfest, the brainchild of DL Hammons.  In view of the approaching launch of book 7 in the Princelings of the East series: Willoughby the Narrator, I have asked the narrator himself to reprise this piece, first published in 2012, the year of his residency at Castle Buckmore.  I must admit, his narrative style has changed since then.

So, without further ado, a warm welcome please, as I introduce to you: Willoughby the Narrator!

Season’s Greetings to you, dear reader. I am Willoughby, Narrator-in-Residence at Buckmore.  My job is to fill your soul with delight as you imagine the lights, laughter and love to be found during the Yule season at Castle Buckmore.

You know Buckmore of course, by reputation if nothing else. Set in the gentle rolling western hills, at the edge of the wilderness but the heart of civilisation.  In the summer, gentle breezes waft sounds and scents of love and plenty around the tree-filled courtyards and through elegant homes.  In winter, the ice cracks on the crags and the people gather in warm bars, round log fires, and in the Great Hall where food and drink are freely available.  The bounty of Prince Lupin, King of Buckmore, his beautiful Queen, Nerys, and the Lady Nimrod ensure that all are welcome, and everybody feels that they belong and contribute to Buckmore’s success.

Compared to some, the Buckmore Yule festivities are not spectacular.  They are filled with that genuine warmth that suffuses the hardest heart.  My visits in the past have been limited to the role of a visiting Narrator, this year I am truly part of Buckmore, being honoured with the role of Narrator-in-Residence for the twelvemonth from Midsummer Day. 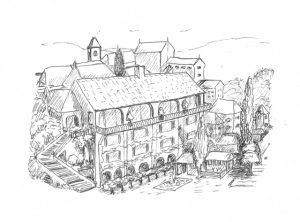 So, how does Yule begin at Buckmore?  Not with a bang, nor a whimper either.  It starts at daybreak with the Solstice choral festival in the Great Hall.  Imagine choirs of angels in the skies above.  That is what the Buckmore singers are like, posted at stations around the Great Hall, some on the ground, some in the minstrels’ gallery, some high up under the very eaves themselves.  Cleverly designed part songs fill the air with music, the traditional songs of midwinter: See amid the snow, The Holly and the Ivy, Good King Wenceslas, In the Still of the Night.  Prince Lupin makes a formal speech of welcome, then children take turns to read from the traditional story of Solstice, reminding us of the disappearance of the sun, only to reappear as the days grow longer once more, bringing with it long lost friends and good harvest.  Then the Elder of Buckmore tells a story of Solstice from his or her youth.  This year it will be Mistress Cefyl.  I’ve been working with her to make the story of her first Buckmore Solstice one that is easy to tell and enjoyed by all.  Then there are a few more songs that everyone sings, led by one of the minstrels.  Prince Lupin leads the recitation of the Buckmore Solstice Oath, then there is another song by the choir and the event is over.  But it is just the start, really, as after the service is an all-day feast in the piazza and everyone plays games and has a good time till well into the evening.

The next three days at Buckmore are dedicated to groups of trades, who hold exhibitions of their work and talk to everyone who is interested in them.  Some trades use it as a regular hiring fair, but it is really a celebration of their skills.  This is a time when visiting Narrators and Artists find Buckmore particularly welcoming, especially those that no longer have a permanent home to go to.  Can you imagine being out in the wild, out in the cold during Yule?  A cold, lonely existence, with not much food either.  I’ve done it, I remember.  I take pity on anyone who finds themselves alone at Yule through no fault of their own.

Following the trades fair is Children’s Day.  Most families manage to find some sort of gift for each of their children, plus a spare which goes into a big basket filled with hay.  Can you imagine what happens to that? After a children’s party in the piazza, with lots of games and running around, there are prizes to be giving out, and anyone that does not win a prize gets to put a hand in the basket and pull out a present! I’ve not met this custom anywhere else, but I think it is one that should be more widely adopted, don’t you?

The next day is the Narrathon.  Some people call it Parents’ Day, since it gives the parents a day off after all their hard work.  The Buckmore Narrator has a major role in this of course, but Buckmore also welcomes itinerant narrators for the season, and that makes life much easier.  If a good number of narrators are there, the Narrathon can go on all night and into the next day.  Indeed it’s a bit of a challenge for the new Narrator-in-Residence to see if he or she can surpass the finishing time of the previous year.  I think this idea of Prince Lupin’s to have the post held for one year at a time is just to lengthen the Narrathon! 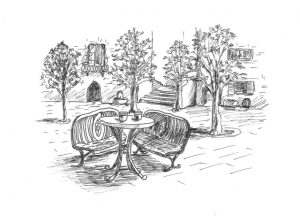 The next two days (including the run-over from the Narrathon) are rest days where people go visiting, children play with their presents or play games with each other.  On the day before Green Willow Day there are various sports and games played in the piazza and teams from different parts of the castle take part.  You can make up a team with your friends, it doesn’t have to be formal.  Last year I gather there was a team made up of everyone whose name began with F.  They came fourth!

Finally we get to Green Willow Day, which is the last day of the year.  It starts with everyone meeting outside the castle for a walk round the castle walls, and then round the limits of Buckmore town.  If you can’t do both you can stop for an early drink after the wall walk!  When the walk has finished there is a hot drink in the piazza called wassail which tastes very nice and warming.  It is served by Prince Lupin and Queen Nerys and then Prince Lupin makes another speech (about green willow and renewal of life in the spring) while everybody drinks up.  People chat for a good while before getting ready for the party in the Great Hall in the evening where there is music and dancing and food through until midnight.  Then everyone says ‘Happy New Year’ to each other, and the young lads (and often the not-so-young, I’m afraid) kiss all the girls they can find.  Then everyone returns home for a good sleep before the New Year really begins.

And that is Yule at Castle Buckmore!

#DejaVu BlogFest | Buckmore at Yule by Willoughby the Narrator