The Road to Erebor from David Colombo Photography is a random Flickr photo that I picked in response to this week’s Chuck Wendig prompt.  I’m grateful to the photographer for such a moody, intense subject!  Today’s flash fiction is just over 1100 words; it goes back to a random character challenge last year, and looks like it’s the start of something longer… 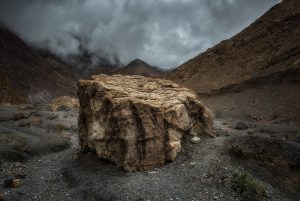 The Road to Erebor

You would have thought that a man, a bard, no less, with two sacks of gold under his cape, and a horse between his knees, would be happy to be in Lockamora.

The very sound of the word had that indefinable whiff of green fields, pleasant valleys, soft beds and hard women.  No that’s not right, soft women and hard beds… oh, never mind.

I sat on the aforesaid horse and leaned on his withers.

I moved my arms to the front of the saddle and he relaxed.  Yes, the ranger’s horse I’d stolen along with the gold had a mind of his own, and a tongue to match.  We went nowhere unless he agreed.  Fortunately, since his previous master—

“Look I’m telling this story and I wasn’t even telling it out loud, so keep your observations and interjections to yourself.”

He answered with a fart.

“And I don’t mean those interjections, either, but you can keep those to yourself too.”

He tossed his head.

To be fair, Boris was a decent enough chap, with the patience to carry me steadily out of town until I’d got the hang of keeping my balance, and reasonably conversational on the long journey, without being chatty. Now he knew who I was and how he’d changed hands, he didn’t mind backchatting me, though.

“So, that’s Lockamora, then.” It wasn’t what I’d expected.

“It looks better in the sunshine.”

“Everywhere looks better in the sunshine. It’ll still look like a two-bit village at the end of a steep valley, with a stinking fishing dock beyond it. In fact it’ll be even more stinking when the sun’s out.”  It took me a good few minutes before I realised. “You’ve been here before?”

“Something like that,” Boris said with one of those all-over shudders designed to keep my nerves on edge.

“Shame she had it off with a carthorse,” I whispered.

Boris shook again. “Made me the magical warhorse I am now. No finer breeding in the land.”

“Which is why you belonged to a ranger?”

“And now a bard,” he sighed. “How are the mighty fallen.”

“Come on, let’s go and get something to eat and a chance to rest somewhere dry.”

“We’ll be lucky,” he snorted. The snot flicked into the river and floated away towards the village. We watched a bent old woman come out of the hovel and fill up her water jug at just the moment that…  “We won’t stay there.”

Boris tossed his head in agreement.

I was the only one in the tavern, although to be fair it was relatively early in the day, and the locals might be out with the fishing fleet or working in the fields.

“Quiet here,” I said to the innkeeper as he pulled me a tankard of ale.

“I’ve come a long way. Any chance I could use it sooner?”

“Everyone here has come a long way. I’ll give you a nod when it’s ready.”

I sat on a bench outside, soaking up the sunshine, the first I’d seen for days.  The tankard went down and was filled up again as the trencher of bread and cheese with a wrinkly apple came out to the table beside me. I picked up the bread, broke a bit off and soaked it in the ale until I could risk my teeth on it. The cheese was hard too, but I could suck that along with the bread. Sometimes I wonder whether there is any decent food left, anywhere in this whole blasted land.

“We’ll have fresh bread termorrer,” the innkeeper said as he returned with a pot of hot soup. “This should put yer back on yer feet.”

“Thanks.”  I wondered whether he could read my mind, or at least my thoughts.

A commotion came from inside; sounded like someone falling down the stairs. “Ah, yer room’ll be ready now, but I’d finish yer food, if I were ye. It won’t wait fer ye.”

The way he said it, I examined it carefully for feet — whether its own or those of travellers inside it.  Couldn’t see any.

The fellow that staggered out to collapse onto the bench the other side of the door was dirty, ragged, blackbearded, if you could give the straggly wisps of hair and stubble the benefit of the word ‘beard’, and dressed all in leather, mostly patched.  In fact, dressed all in patches would be more accurate.

He fluttered a hand at me, and slumped back on the bench, his booted feet managing to collide with a small rock, which stopped him sliding under the table completely. He groaned and pulled his hat down over his eyes.

He grunted. I smiled. I thought about the bed and realised that this chap had just vacated it. Maybe it needed time to air. I finished my breakfast and took the trencher back inside. “Room free, then?”

I hesitated. The stable had seemed okay, so may Boris would be up for a quick exit if I slept now.  “Maybe one more night. I don’t suppose anyone here … no, don’t worry about it.”

He raised his eyebrow. “Yer goods’ll be safe, and I can take them, not coin.”

I nodded. Right. Useful trick, someone not having to voice their wishes.

Now, I didn’t think I’d thought that. “Where it goes to?”

“Aye. Thought that would be yer next thought. Lockamora’s not what ye expected, see.”

He nodded back and I climbed the stairs. There was just the one room. Surprisingly, the bed was clean, with fresh sheets. Nice. I slept.

The next day was springlike and mild. Odd, for September, but it was fresher, newer, than early autumn.

“That rock. It’s the threshold, the dividing line between Lockamora and Erebor.”

He was right. As soon as we got past the rock, it started pelting with rain — dark, driving rain that soaks a body in ten seconds flat.

Well, if I wasn’t going to enjoy the road to Erebor, there was no reason for Boris to like it, either.

Watch out for more adventures of the as-yet unnamed bard (and Boris) in the future!

#FridayFlash Fiction | The Road to Erebor

6 thoughts on “#FridayFlash Fiction | The Road to Erebor”