The Whispering Skull is book 2 in the Lockwood & Co series by Jonathan Stroud. You may remember I was swept away by The Screaming Staircase in December.  I rated it one of my top reads of 2016. 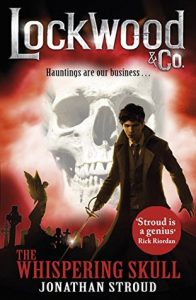 In the six months since Anthony, Lucy, and George survived a night in the most haunted house in England, Lockwood & Co. hasn’t made much progress. Quill Kipps and his team of Fittes agents keep swooping in on Lockwood’s investigations. Finally, in a fit of anger, Anthony challenges his rival to a contest: the next time the two agencies compete on a job, the losing side will have to admit defeat in the Times newspaper.

Things look up when a new client, Mr. Saunders, hires Lockwood & Co. to be present at the excavation of Edmund Bickerstaff, a Victorian doctor who reportedly tried to communicate with the dead. Saunders needs the coffin sealed with silver to prevent any supernatural trouble. All goes well-until George’s curiosity attracts a horrible phantom.

Back home at Portland Row, Lockwood accuses George of making too many careless mistakes. Lucy is distracted by urgent whispers coming from the skull in the ghost jar. Then the team is summoned to DEPRAC headquarters. Kipps is there too, much to Lockwood’s annoyance. Bickerstaff’s coffin was raided and a strange glass object buried with the corpse has vanished. Inspector Barnes believes the relic to be highly dangerous, and he wants it found.

At first, the Whispering Skull of the title seems to be relegated to a secondary role. Alert readers will know that can’t be the case, so I was primed and ready for the skull to take centre stage in the later investigation.

If anything, I found this book even more enjoyable than the first – maybe because less needed explaining.  This slightly steampunk contemporary dystopian world is elegantly described in rich detail. The finds are just as creepy, the characters involved as varied, and as rounded, and the situations our intrepid agents find themselves in even more treacherous.  There are plenty of excursions around the seedier parts of London, all of which met with my London-detail approval!

The inter-relationships of the trio have developed nicely: things are getting to the bickering stage, and some situations explode at the worst of moments.  Lucy is egged on to talk to the skull, which is a pretty dangerous thing to do, and we join the author in constantly reminding her not to trust it.  In fact, I was fully immersed in this world once more, and enjoyed nearly every minute of it.

I did spend a few minutes wondering why I don’t find this horror scary.  I think it’s because the atmosphere and the objects, like the whispering skull, sit alongside Harry Potter and the horcruxes (and other seriously nasty things including the necklace that nearly strangles Katie.)  In fact its darkness is definitely of the Potter variety.  That also suggests it might still be MG, despite the considerable sophistication of the plot.  Older MG, true, but still in genre.

Five stars from me, just like the first book. I’m looking forward to the next, since I have book 4 from Net-galley already (this came from the library).

I’m entering this as an object to search for in Bruce Gargoyle’s Wild Goose Chase Reading Challenge!