MG or not MG – a question that came up recently for two books intended for tweens and young teens.  Okay, the older end of MG, but still.

We often discuss what makes a book suitable for ‘middle grade’ readers – the 8 to 12 year old age group, although in some places it shifts to 9-13 – in the Great Middle Grade Reads group.  Some respected children’s authors seem to ignore the general guidelines – and so do their publishers.  Then again, world events blow away what we adults want to protect in a young person’s innocence.  The more I read in the MG genre, the less I understand what is acceptable.

Two books I read in the Clean Sweep ARC challenge last month fall into this category, so I thought I’d feature them both together:  The Creeping Shadow (Lockwood & Co book 4) and The Ugly Teapot.

The Creeping Shadow by Jonathan Stroud 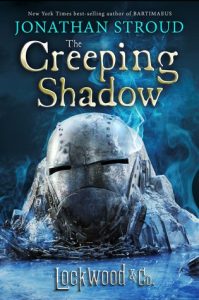 After leaving Lockwood & Co. at the end of The Hollow Boy, Lucy is a freelance operative, hiring herself out to agencies that value her ever-improving skills. One day she is pleasantly surprised by a visit from Lockwood, who tells her he needs a good Listener for a tough assignment. Penelope Fittes, the leader of the giant Fittes Agency wants them–and only them–to locate and remove the Source for the legendary Brixton Cannibal. They succeed in their very dangerous task, but tensions remain high between Lucy and the other agents. Even the skull in the jar talks to her like a jilted lover. What will it take to reunite the team?

You may notice that I have already reviewed The Screaming Staircase and the Whispering Skull.  That’s 1 and 2 in the series.  I got The Creeping Shadow from Net-Galley for early(ish) review, since it was already published.  My library didn’t have the 3rd book (why?) so I jumped into the fourth – with very little ‘what have I missed?’  That was self-explanatory, and I doubt it’ll be too much of a spoiler when I read book 3. My library has now bought that for its stock 🙂  I would, however, recommend reading books 1 & 2 first.

The Creeping Shadow opens with Lucy doing ghost-work on her own, finding her role in ghost-busting less than satisfying.  All those inept supervisors who want to micromanager her.  (My editor would empathise). As the blurb says, she joins her old team for the case of the Brixton Cannibal.

This one is more than ghoulish, ghostly, and things that go bump in the night.  This is Silence of the Lambs territory, and I had to stop reading after tea-time, knowing I’d have nightmares if I carried on.  It’s not just that it’s a cannibal of a ghost, it’s the detail.  Frankly, it’s enough to turn anyone’s stomach. Is it MG or not MG?  Maybe kids today have stronger minds than me.  I would seriously recommend any parent whose kids loved the first 2(3) to make sure they read this one first.  After we dispose of said cannibal, the story rocks on to what I would describe as ‘normal’ territory in ghost hunting.  And ‘rocks on’ is the best I can think of – in a good way!  The story is atmospheric, detailed, clue-ridden, tense and exciting, just as you expect from this excellent series.

Despite the lapse in taste (I shouldn’t use that word), The Creeping Shadow is an excellent read, well worthy of the series, and takes us on to the next Lockwood & Co book with a tantalising revelation in the last scene.  Not really a cliffhanger… just an entree!

The Ugly Teapot: Book One Hannah by Fred Holmes 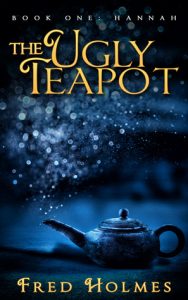 Fourteen-year-old Hannah Bradbury loved her father so much that she worried about him constantly. After all, he was a photographer who traveled to the most dangerous places in the world.

To allay her fears, each time he came home he brought her silly gifts, each one with supposed magical powers: the Seal of Solomon, the Ring of Gyges, even Aladdin’s Lamp. It was that lamp Hannah found the most unbelievable, for it looked like an ugly teapot. Nevertheless, her father assured her it was real, and made her promise to save her three wishes for something very special.

Then . . . six months later . . . the unthinkable happened. Her father was killed while on assignment to Baghdad. And so on the day of his funeral Hannah did something she never thought she would ever do.

The Ugly Teapot by Fred Holmes is a timeless tale, filled with magic and adventure. More importantly, it will make you believe in the overwhelming power of love.

This ‘Read 4 Review’ book from the Great Middle Grade Reads group starts well.  Hannah’s dad died on a mission in the Middle East.  The author handles the craziness of emotions collectively called grief in a way that would help any child (or adult) to realise that they are perfectly normal at this abnormal time. Hannah gets somewhat obsessive over her father’s things, and her mother just wants to clear the lot out.  Both polar opposite reactions, and both perfectly normal.

The discovery of the Ugly Teapot really being Aladdin’s Lamp is an interesting twist.  Despite plenty of warnings from the genie, and Hannah appearing to think things through very carefully when she considers her three wishes, she then abandons said thoughts and jumps straight in to a really silly wish.  And then compounds it with another knee-jerk reaction when she realises the implications of the result.  This leads to an exciting desert adventure, pursued by evil spirits who want the lamp.  Even in contemporary Middle East countries, she encounters warmth, friendship, and hospitality on her mission.

The sensitive treatment of other cultures in this book pleased me.  The graphic murder of her host and his entire family in Chapter 20 was unnecessary. Is this MG or not MG? It was bloodthirsty in the extreme, and even though the author may have wanted to show just how evil the evil monster pursuing Hannah was, this was really unnecessary in an adult book, let alone one that is distinctly targeted at MG.

There are some oddities of style that the author maintains.  I once had a boss who delighted in including obscure words and phrases in his campaigning with civil servants and MPs to remind them they weren’t as clever as they thought they were.  Most of us had to look them up too.  Fred Holmes is another who throws in odd words seemingly at random.  Some could, I suppose, be local phrases in his part of North America (dialect is fine, but odd when used in an adventure in the desert).  The kindle dictionary listed others as obsolete and archaic, which suggests he just wanted to use pet words.  Some don’t have any resonance with current words; as a scifi writer if I make up ‘future’ words they have to be understandable by my readers.  I don’t want them to have to resort to a dictionary.  Mr Holmes obviously does. I don’t see the point of using archaic words in MG fiction, though.  Expand their vocabulary by all means, but make the words usable.

The story ends in a disappointing way.  I thought the imagery and the descriptions were first class, but it has an unsatisfactory explanation which I felt was a cop-out.  Hannah hands the teapot on to someone else, so I suppose there will be an Ugly Teapot book two.  I’m afraid I’m unlikely to read it.  The last paragraph of the blurb should have been the warning.

Am I being too picky?  Are 9-13 year olds well able to deal with murder in the most unsavoury ways?  Body count is an element that most of our Goodreads group see as an important issue.  MG authors need a good reason to kill off characters, and not do it graphically.  Some people felt the body count in my book The Talent Seekers was too high, but at least that was in battle, and for a righteous cause, without gory details.  These both go beyond that, in my view.  What do you think?

MG or not MG? My Book Review question

4 thoughts on “MG or not MG? My Book Review question”