The Mystery Blogger Award was given to me by J Lenni Dorner around June 6th.  I do say on my ‘policies’ that I don’t accept this type of award, but there’s always an exception, especially when I need a blog post.

Rule 1: Put the award logo/image on your blog. 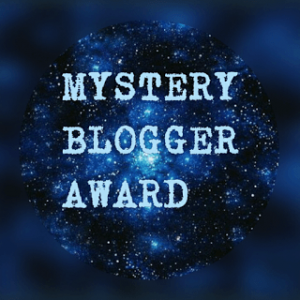 Rule 3: Thank whoever nominated you and provide a link to their blog.

Thank you, J Lenni Dorner.  I really do thank you from the bottom of my heart.  It’s just above my keyboard 🙂

Rule 4: Mention the creator of the award and provide a link as well.

About the creator: Okoto Enigma’s blog The creator’s name, Enigma, means mystery, thus the title of the Mystery Blogger Award.

Rule 5: Tell your readers three things about yourself.

Well, maybe I’ll keep it to a few less…

Rule 8: Ask your nominee any five questions of your choice, plus one weird or funny question.

I have some links to my most visited posts on the right, but as with many others nominated for this award, blog hops and A to Z Challenges tend to throw in some bias there.  ‘Best’ can be a difficult one for someone who both writes fiction and reviews books, but I’m going to pick a recent story which seemed well received and also one of the A to Z Challenge ones, for obvious reasons.

Good luck to everyone else who does this Mystery Blogger Award!

9 thoughts on “Mystery Blogger Award – received and given out”