The Queen’s Envoy: a prequel. I’ve been sitting on my copy (well, not literally, since that would break my Kindle) of Lord David Prosser’s Barsetshire Diaries for quite a few years now, with other things combining to press it down the TBR list.  Then I needed a book title starting with the letter Q.  David’s second book is a prequel to The Barsetshire Diaries, so I nipped over to Amazon and availed myself of a copy of The Queen’s Envoy.

The Queen’s Envoy (The Barsetshire Diaries #2) 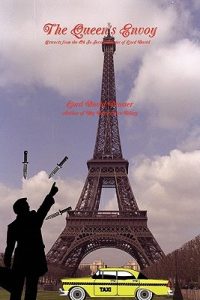 The prequel to My Barsetshire Diary describing Lord David’s inheriting his title and an unusual job as unofficial envoy to HMG.

After inheriting his Title, Lord David little realised he would also inherit a job. After all, he’d just retired. But this job was as an unofficial envoy to HMG and could he turn it down? He’s a fish out of water groping his way from situation to situation with a hint of desperation but with all the aplomb and stiff upper lip he can muster.Will he cope with all that life throws at him and all the women that seem intent on compromising him?

Lord David Prosser is just an ordinary pleb like you and me until the start of this book, when he receives a summons to his solicitor’s office.  I’ve always wondered why people already have solicitors when they get into trouble.  How come people have to be summoned to their solicitor?  Why don’t they get emailed by (or receive a letter or phone call from) the solicitor of the other party?  Is it to do with being married?  I mean, I used a solicitor to buy my house, but that was it, as far as I am concerned.

Anyway, plain Mr Prosser was able to respond to said solicitor’s summons to discover he’d become a lord due to the death of some distant relative.  A house came with the job (so I suppose they didn’t need the solicitor for that).  Then some shady civil service type chap sidles up to him one day. Has he ever been to some far off place in the Middle East?  Perhaps he’d like to go visiting, unofficially, just to smooth things over, using his lordly position, implying he was doing his duty for god and the queen.  But not to help other people every day and obey the brownie code.

If you don’t get that last bit, you may find some of the jokes within The Queen’s Envoy a little strange.  That’s because parts of your English education need revision. Brit-born Brits of a certain age will giggle, snuffle, chortle and possibly even nose-slurp their way through this book.  Naive Lord David goes from one improbable scenario to another, doing exactly what a bumbling English milord is expected to do abroad, but managing to pull off dastardly feats of diplomacy with a deft wipe of the handkerchief.

If you enjoy Fawlty Towers, Mr Bean, or Yes, Minister, you will love this book.  It’s a quick read, partly because it’s beautifully written, and you’ll want to go back for more.  And so, I’m going back to the first in the series….

Five stars is too few, probably.

The blurb doesn’t do it justice. C’mon David, at least pop a few quotes from your reviews in too!