All the Light We Cannot See is one of those books you hear a lot about.  I put it on my TBR.  I picked it up on my occasional visits to Waterstones bookshop in Norwich, read the back, considered buying it… and then something else caught my eye.  And then my bookclub selected it for June!

All the Light We Cannot See 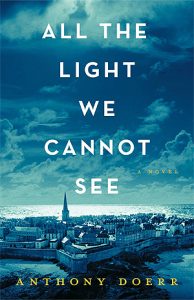 Winner of the Pulitzer Prize
From the highly acclaimed, multiple award-winning Anthony Doerr, the beautiful, stunningly ambitious instant New York Times bestseller about a blind French girl and a German boy whose paths collide in occupied France as both try to survive the devastation of World War II.

Marie-Laure lives with her father in Paris near the Museum of Natural History, where he works as the master of its thousands of locks. When she is six, Marie-Laure goes blind and her father builds a perfect miniature of their neighborhood so she can memorize it by touch and navigate her way home. When she is twelve, the Nazis occupy Paris and father and daughter flee to the walled citadel of Saint-Malo, where Marie-Laure’s reclusive great-uncle lives in a tall house by the sea. With them they carry what might be the museum’s most valuable and dangerous jewel.

In a mining town in Germany, the orphan Werner grows up with his younger sister, enchanted by a crude radio they find. Werner becomes an expert at building and fixing these crucial new instruments, a talent that wins him a place at a brutal academy for Hitler Youth, then a special assignment to track the resistance. More and more aware of the human cost of his intelligence, Werner travels through the heart of the war and, finally, into Saint-Malo, where his story and Marie-Laure’s converge.

I can see why it won prizes.  I can also see why people have used such glowing phrases to describe it.  Like others who have read it, I felt it got bogged down after a gripping start.  Fortunately, I carried on and got swept away with it again.

My problem is the way it jumps back and forth, between times and beside the many different characters whose lives we are gathered into.  I complained about Sanctus‘s regular 2.5 page chapters – sometimes this book has a chapter of less than one page.  I think there is more justification for these, especially near the end, where immediacy is everything, switching viewpoints during a bombardment of the city.  For while, though, it was tedious. Sadly, I lost interest in the progress of Marie-Laure’s father. That could have been clever writing, since he was just about to disappear from the story.  Had the writer written him off, and the reader anticipated it?

This to-and-fro construction seems to be the Thing at present.  How to Stop Time, which I reviewed last week, also jumps forward and back, but for much better reason; and the story needs it.  Here, it just jumps forward and back, and I really didn’t see the benefit of doing so.  Present, then flashback to bring us forward naturally, would have worked just as well.  If anything, it made the tension less as it got closer to the “will he, won’t he?” moment.

I may be being picky.  It was beautifully written, wonderfully imagined, and dramatically rendered.  The reader was immersed in the later parts so deeply that the fingers froze.  Some of the imagery is ghastly.

In 1974 the survivors in this story have become middle aged.  I remember when I was young people still asked  “What did your daddy do in the war?”  Fortunately, I don’t know what my German and French friends’ fathers and mothers did in the war.  Maybe that is why Brits are so obsessed with war stories even now.  None of our parents went through anything as bad as the continental Europeans went through. Maybe that’s why we can’t cope with the idea of a unified Europe.  Guilt complex.

All the Light We Cannot See is definitely a book that made me think.  I’m really glad I read it, and recommend it whole-heartedly.  Just get through that early plateau.

Book Review | All the Light We Cannot See

7 thoughts on “Book Review | All the Light We Cannot See”