The Fourteenth Goldfish was the Goodreads Great Middle Grade Reads group’s Book of the Month for May.  They didn’t have it in my library, so I asked for it.  They eventually agreed, and only charged me the regular reservation fee. I got it… in June!  By this time I’d read what members of the group had thought about it, but I still reckoned it was worth reading.  And so it proved…. 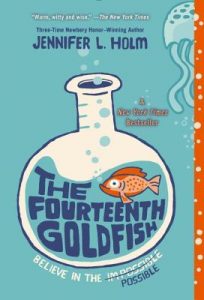 Galileo. Newton. Salk. Oppenheimer. Science can change the world . . . but can it go too far?

Eleven-year-old Ellie has never liked change. She misses fifth grade. She misses her old best friend. She even misses her dearly departed goldfish. Then one day a strange boy shows up. He’s bossy. He’s cranky. And weirdly enough . . . he looks a lot like Ellie’s grandfather, a scientist who’s always been slightly obsessed with immortality. Could this gawky teenager really be Grandpa Melvin? Has he finally found the secret to eternal youth?

With a lighthearted touch and plenty of humor, Jennifer Holm celebrates the wonder of science and explores fascinating questions about life and death, family and friendship, immortality . . . and possibility.

I thoroughly enjoyed this book. I thought it a little slow to start with, but once grandpa turned up in the guise of a snotty teenager that acted like a grumpy old man, the whole thing took off. It’s called the Fourteenth Goldfish for a very touching, if funny, reason.

I enjoyed Ellie’s pedantic nature and eclectic interests. She had a real presence about her that encouraged me to read on, and once I got through that initial hump, I didn’t want to put it down.  There was plenty of fun, many problems surrounding the old man in teenage clothing – well, it was hard to get this teenager to wear teenage clothing: he wore what he was used to. The problem of an adult losing access to everything he owned (including intellectual property, i.e. his experiments) was almost shocking.  I wondered how it would be if someone suddenly said, no, I couldn’t possibly be who I claimed to be.  So something in there for adults to mull over, as well as middle graders.

Some of our reading group disliked the somewhat stereotypical picture of the mad scientist, but I felt other scientists were treated with respect, and Ellie’s approach to science was spot-on.  The ‘mad scientist’ trope only applied to Grandpa, and well, he was a bit wacky.

Fascinating tale which completely lives up to its reputation. The ‘teenage grandfather’ is beautifully written. An excellent fun summer’s read, with something to chew on as well. I gave it five stars, despite the slow start.

One thought on “Book Review | The Fourteenth Goldfish”