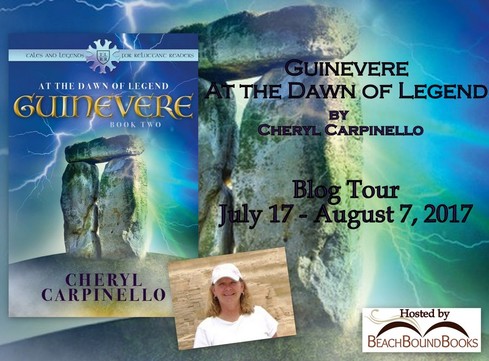 Guinevere: At the Dawn of Legend is newly published by author Cheryl Carpinello. I’m delighted to welcome Cheryl, a fellow BookElf, through a BeachBound Books Blog Tour which runs from July 17 – August 7, 2017. There’s a giveaway for a $25 gift card right at the end of this post.

Guinevere: At the Dawn of Legend

“Think before acting,” her father always warned. But Princess Guinevere is ruled by her heart. Her betrothal to King Arthur has not changed this.

When Guinevere and Cedwyn’s latest adventure takes a dangerous turn, they find themselves embroiled in a life-or-death struggle as foretold by Merlyn’s Goddess of the Stones. Renegades—foiled in their attempt to kidnap the princess—steal the children of Cadbury Castle to sell as slaves. Guinevere and Cedwyn vow to rescue the children, but a miscalculation puts them all in more danger. The plan quickly unravels, and Guinevere’s impassioned decisions come crashing down as Cedwyn chooses to turn his dream of becoming a knight into reality. Will their courage be strong enough to survive, or will one make the ultimate sacrifice?

Guinevere: At the Dawn of Legend – 5-Star Review from Readers’ Favorite

Reviewed By Emily-Jane Hills Orford for Readers’ Favorite
Children are attracted to adventure and they don’t see the risks that adults do, refusing to accept many of the limitations and rules enforced for the sole purpose of keeping children safe.

Guinevere and Cedwyn are close friends and Cedwyn, although still very young, has pledged his life to protect the princess who will one day be his queen when she marries King Arthur. Being children, they have their adventures. And one such adventure to the mysterious standing stones results in magical visions and then a race for their lives.

There are people intent on kidnapping Guinevere. When she out-foxes their intentions, they take the castle children instead to be sold into slavery. Guinevere insists on chasing after the kidnappers and rescuing the children. The adventure intensifies as they risk their lives and become heroes. But are they totally successful in rescuing the children? Or do they just manage to create more problems in the process.

Guinevere: At the Dawn of Legend is the sequel to Cheryl Carpinello’s first Guinevere story, Guinevere: On the Eve of Legend. Both books take the fascinating Arthurian legends and create stories that will entice even the most reluctant of readers. With realistic characters and an exciting plot full of adventure, the reader will be pulled along to an unexpected conclusion, one that demands another book to complete the series.

Young readers will certainly easily associate with Guinevere and Cedwyn, who, at their young age, take risks and disobey their parents, while at the same time they reach out to help others and become heroes. A great way to entice readers, even reluctant ones, to follow the adventures found in legends.

Read the first in the series
Book One – Guinevere: On the Eve of Legend

At the dawn of Camelot, one young girl is about to take her place beside the greatest king in England’s history…. She is a mere child of twelve. But in these medieval days, this is the age when childish things must be put away and greater responsibilities accepted—all in preparation for a betrothal of marriage.

For young Lady Guinevere, on the advent of her thirteenth Birth Day, the whole idea is quite unbearable. After all, what could be better than spending her youth playing with her best friend Cedwyn, roaming the grounds around the castle looking for mythical creatures or hunting rabbits? However, the wizard Merlyn—her teacher and friend—knows that destiny has a way of catching up with a person. His arrival sets in motion a series of events that will lead Guinevere to her destiny whether she is ready for it or not.

I’m a retired high school English teacher. A devourer of books growing up, my profession introduced me to writings and authors from times long past. Through my studies and teaching, I fell in love with the Ancient and Medieval Worlds. Now, I hope to inspire young readers and those Young-at-Heart to read more through my Tales and Legends for Reluctant Readers set in these worlds.

See my reviews of Cheryl’s other books: King’s Ransom -Young Knights of the Round Table, and her Egyptian time travel adventure Sons of the Sphinx

Now for the GIVEAWAY

Blog Tour | Guinevere: At the Dawn of Legend

4 thoughts on “Blog Tour | Guinevere: At the Dawn of Legend”