Blood Moon is the second in the series about the wolf Nashoga and his pack.  I thought I had this book, hunted everywhere for it, then realised that in spite of putting it on my TBR in 2013,  I hadn’t got it.  You’ll see from my review – five years ago – of the first in the series, Nashoga, that I really liked it.  I don’t know why I didn’t get around to it sooner, but I’m glad I did. 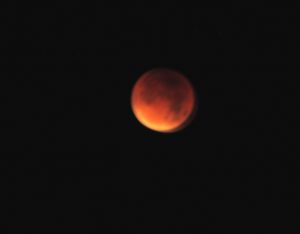 I picked today to review it for you since there is a partial lunar eclipse (aka blood moon) coming up in Europe and much of the rest of the world, on the night of 7th/8th August.  Much to my surprise, there are few total eclipses in the near future – 31st January 2018 in America, and not another one visible from the UK until 2026!  I’ve seen a few already, and took some photos of the last but one.  They come in groups, which I didn’t realise, and the next one is ages away.

I’m sure I don’t need to remind Americans of the total eclipse of the sun visible in the USA on 21st August! It’s probably all over your news.  But then, of course, it’s science, and you can’t trust anything scientists say.  Maybe it’ll be banned (the eclipse, that is). 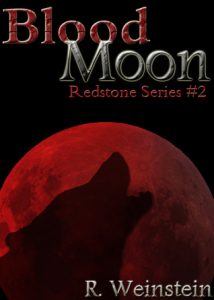 Members of the Thunder Clan bring devastating news to the Redstone Pack. With vulnerable young pups to protect, Nashoga must decide whether to face this threat or risk the pack’s destruction. If Nashoga and the pack take a stand, The Prophecy of Blood Moon may be the key to their survival…or their demise.

Despite the elapsed time, I picked up on the Redstone clan, their names and interactions, pretty quickly.  The descriptions are beautiful, the plot… okay.  I’m not sure I really enjoyed the story; there are some weird and spiritual things that occur taking it into the fantasy realm of animal stories.  I was pleased I finished the story though, even though it ended on a cliff-hanger.

In the time between finishing it and reviewing it, I realise I have forgotten most of it.  Searching for the blurb (which usually triggers full memory of a book) made me wonder whether Ms Weinstein has given up on the stories, since this was first published in 2011, and there is no Goodreads blurb. Maybe she has written herself into a plot hole, and can’t get out. Like other reviewers, I don’t think I would read a third book in the series, despite giving this four stars on Goodreads.  It is a good read.  I just wouldn’t recommend it unless you had read Nashoga and loved it.

But it does contribute to my What an Animal Challenge, and also to scaling my TBR Mountain!