This book review roundup grabs all the books I read in July and August – many for the GMGR Book of the Month – while I’ve been posting reviews from earlier (mainly for the Clean Sweep ARC).

I didn’t do any reading on a beach this summer.  I played golf next to several beaches… Cromer (Overstrand), Sheringham, Caister, Hunstanton…. but no time to dip my toes in the water.  The sun-lounger stayed proudly in the garden, keeping an eye on the guinea pigs while they mowed the grass.  Percy and Midge are excellent lawn-mowers, and have been teaching Biggles how to do it.  Bertie hasn’t caught on yet, and Oscar is still a lazybones.  I just give them shorter grass so that the others can level things up a bit. 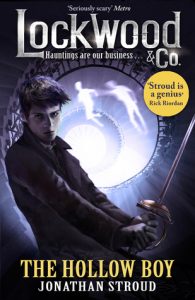 The third in Jonathan Stroud’s excellent Lockwood & Co series, and completely up to the standard of the others.  Maybe it lacks a little of the ‘newness’ of the earlier (and subsequent) books: The Screaming Staircase, The Whispering Skull, and no 4, The Creeping Shadow. Lucy has a rival for Lockwood’s attention, and although her preoccupation becomes somewhat irritating, her attitudes and responses are well written.  Stroud neatly maintains Lucy’s disdain by always referring to the newcomer by her full name – I only noticed late on.  The detail and imagination that goes into the plot and world-building, are, as ever, mind-blowing.  Perhaps I’m being mean only giving it four stars on Goodreads.

When I finished this, I thought it was possibly a candidate for my book of the year, yet a week or two later I was struggling to remember the details that others were including in their comments on GMGR.  Once I realised that, I used those as prompts to remember the plot.  It’s not an ordinary book! 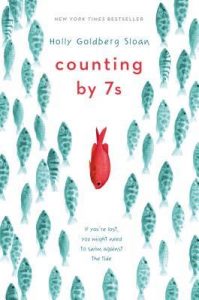 Willow Chance is in trouble at school because she’s bored stiff and would rather be pursuing her own studies. Nobody recognises her genius in school, but fortunately her parents do, and have a great coping strategy.  Then they are killed in an auto accident.  Willow quickly realises she’s in trouble, with no relatives to step in and care for her, she’s going to be fostered or worse.  She takes things into her own hands, finds friends (mostly with other dysfunctional attributes, or so society says) who can be manoeuvred into shielding her from the System, and then eventually manipulates the entire situation so that those who do help her become part of her grand schemes.  She’s one clever cookie, and you root for her every step of the way.

The only thing I didn’t like about this book is that author Holly Goldberg Sloan tended to flag up the ideal solution too far in advance for me. Maybe the right age group would just keep hoping until it finally happened. 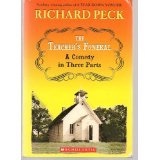 This was a really enjoyable book that I bought for 1p plus shipping because it wasn’t in my library.  Most of the rest of this bunch were.  It’s a beautifully descriptive tale of kids living on a farm at a time when technology was changing fast. Plenty of small adventures, a different pace of life, and different standards altogether. I wonder how today’s kids take to it?

Author Richard Peck seems to have a big following on GMGR, and I can see why. 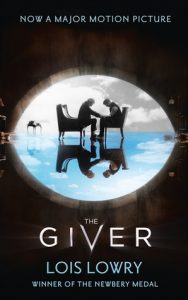 This book, first in a series by Lois Lowry, was originally a book of the month about eighteen months ago.  I read the online preview and wanted to get it.  Then it turned up in my library.  I read it in two sittings, largely because I didn’t want to stop.  This is a strangely comforting yet dystopian world setting, which cast me back to dystopia I read in my teens, like The Machine Stops, The Midwich Cuckoos, 1984, and others, when they were just called science fiction or future worlds.

I like the way the narrator, Jonas, reacts to the new information he absorbs from The Giver, but wonder where he got the initiative and rebelliousness from to react to his new knowledge.  The story stops suddenly, and I had to go back a few pages to reread and decide what happened.  Then I thought of other interpretations.  Then I read Ms Lowry’s comments on what had happened to the book since she won the Newberry Medal for it, and I can see why it has taken on the life it has.

Plenty to think about, for a new generation. 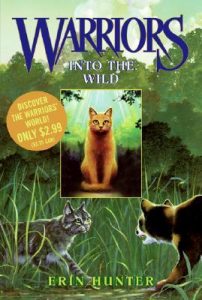 Much lauded series by Erin Hunter, featuring wild cats, their tribes, trials and tribulations.  Like many series, it features a young person finding out they can be a xxxxx and going to school to learn out how.  They come through with flying colours after tackling hardship and loss.  Warrior cats are different because they are cats, and although they reply, question or ask, they always miaow or mew when they might otherwise say.  Every time it jarred on me. It was a lot of times.  Despite my supposed affinity for writing stories about anthropomorphic animals, it took me a long time to start enjoying it, mainly because of these idiosyncrasies.  But the tale is well told, the imagery enchanting, the characterisation pretty good, and I can see why it’s an extremely popular series.  I bought this first one for my Kindle, but doubt whether I’ll buy any of the rest.

There are, of course, others to get the book review roundup treatment in the next few weeks.  Among them are The Perilous Question (heavy historical non-fiction dressed as a novel), The Ship Who Sang (delightedly revisited after many years) and Equus (short stories on the theme of horses and similar steeds).  On the other hand, the Assassination of Margaret Thatcher has disappointingly been consigned to my DNF pile.

If any of the above take your fancy, click on the cover to take you to its Goodreads page.

MG Book Review Roundup – or what I read on the beach