Willoughby is the hero of book 7 in the Princelings series.  He is stranded in the Realms, and has to work out how to make a living.  After meeting up with some like-minded young people over the summer, he and Tatum set off in search of fame and fortune, and discover the world of Narrathons, festivals of story-telling, which Willoughby thinks must be easy. 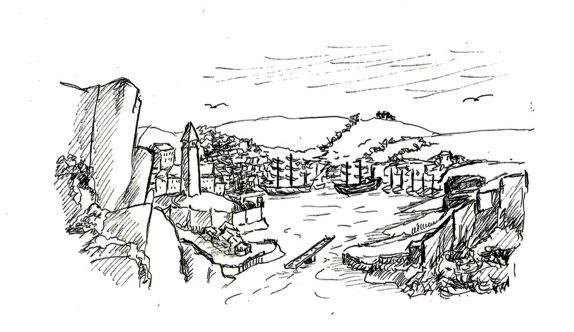 So Willoughby’s first Narrathon is at Cabot, a castle in the west of the Realms, roughly (well, exactly) where you’d find Bristol today. There’s a tower in Bristol called the Cabot Tower, on a round hill overlooking the docks.  The SS Great Britain is moored on the opposite side of the river, in case you know where I mean.

I was a bit short on inspiration for a flash fiction today, so I thought you might like a story set in September.  I picked this one from the first section of Willoughby the Narrator, where a very nervous Willoughby wishes he hadn’t signed up for the Narrathon after all. You may have read the original of Diamond Souls, which if I remember rightly was a Chuck Wendig prompt all the way back in June 2014.  This is, let’s say, less polished!

In which I tell the tale of ‘The Diamond Souls’

Just three others had turned up to tell fairy tales, so although I held number 15 in my hand, I was the tenth speaker of the morning. I’d listened to them all. The squeakers, the mumblers, the ones who got hopelessly lost. A few did a good job and got a proper round of applause, not just a sympathetic one.

“And now, I introduce you to Willoughby from Castle White Horse, and his story ‘Diamond Souls’!”

I stood on the fiddlesticks. Hundreds of pairs of eyes stared at me. Well, maybe a hundred eyes. There must have been a thousand there for Arcturus yesterday. Breathe. Smile at them. Begin.

“Each and every one of us is going to die—sometime!” I grinned at everyone. “But not yet, I hope—well, at least not until I’ve finished my story.”

A few chuckles rippled through the audience.

“Have you ever thought of what happens to us after we die? Nobody knows for sure—except…,” I paused for effect, “the daughter of Aelred and Eowyn.

“You probably know the legend of Aelred, who fought the dragon. No one else had the courage to go to the dragon’s lair, and tell him stories for so long that his scales grew pale and his eyes grew dim. Who do you think taught him those stories, though?”

I stopped, wondering if I could get the audience to answer. Surely they knew this one.

“It was Eowyn, his wife, who taught him.” I wondered whether anyone was listening, but ploughed on.

“Their daughter Arwena was already a grown woman when Aelred was called to fight an ogre. Aelred and Eowyn packed for a long journey and left Arwena in charge of their people.

“‘Expect us when the cock crows three times in the night,’ Eowyn told Arwena, and they rode away.” I was sure I was supposed to say something poetic here, but the silence was wobbling my brain.

“Days passed, then weeks, then months. Winter froze the Vale of Murad, and Arwena wondered whether her parents were frozen too. There was no news, and the valley was cut off.

“Many moons passed, and Arwena got married, and her children were eight and six years old when a bird flew onto the roof of the castle one night and crowed three times. This was extraordinary since it was an oystercatcher, and they don’t crow!” I did my best imitation of an oystercatcher’s mournful peeping call.

“‘They made friends with the ogre and persuaded him to leave the people alone. But they had to agree to go with him to his cave, to keep him company.’

“Arwena asked if they were dead, then. And the oystercatcher continued, ‘The ogre promised that when they died they should travel so far away that they would turn into the diamonds we can see in the sky at night.’

“And Arwena asked, ‘Are my parents stars in the sky now?’

“‘Yes, they are diamond souls, studding the universe above us, watching over us and helping us live good and fruitful lives.’

“‘Look up, look up,’ echoed the oystercatcher’s call across the vale.

“And Arwena looked up and saw two stars fixed in the sky.” I looked up at clouds and realised I was supposed to tell this story at night, preferably a starry one.

“So remember, if you are good, and true, and brave, and help others, you will have a diamond soul that becomes a new star and lives in the sky, watching over people and helping them find beauty and truth in their lives.” I finished in a rush. This was rubbish. I was rubbish.

I bowed to the audience, left, right, and centre, and backed off the fiddlesticks as fast as I could, although I suddenly realised they were applauding.

“Well done, youngster. Go back up, take another bow!” The announcer pushed me back onto the fiddlesticks, and I bowed again, smiling this time. I liked the applause. This was great! I glanced at the announcer, who waved me back down. “Don’t milk it, though,” he said sternly.

I backed away, feeling as light as a feather. It felt like I was floating. I felt great.

Tatum grabbed my elbow and steered me towards the drinks area. “Not bad. You left stuff out, though.”

“I know. It was so scary up there! But they liked it, didn’t they?”

“Yeah, although there hasn’t been much to like so far. I think your positive points were: one, we could hear you; two, you do a passable imitation of an oystercatcher; and three, the story more or less made sense. Oh, and four, you smiled at us.”

My shoulders were dragging me back down to the ground. “I was rubbish, then.”

That of course comes from Book 7 of the Princelings series – Willoughby the Narrator.  I’ll be doing some special offers during the autumn on most of the Princelings books, so if you need to fill holes in your collection – or get started on them, grab the box set of the first three, and watch out for the specials!

Click the cover to take you to the Smashwords buying page for Kindle and other formats, or the links below it for Apple, Nook and Kobo.