Perilous Question: The Drama of the Great Reform Bill 1832 has quotes on the paperback to promote it:

“lively, witty, and above all, a cracking good read. I found it impossible to put down.” The Spectator

“A political thriller – Borgen in the era of Middlemarch” The Times

A lesson in why you should never trust the quotes on bookcovers, perhaps. 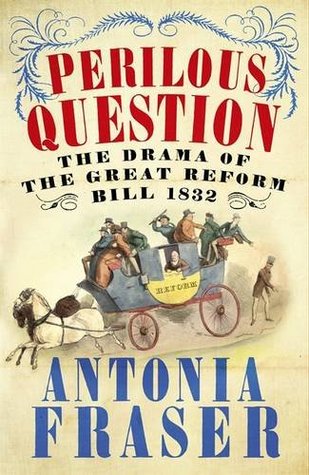 The perilous question is that of Parliamentary Reform, and as I approach it, the more I feel all its difficulty…Earl Grey, 13 January 1831

As a scholarly work on politics, Perilous Question is probably too concerned with the common man. As a history, it is probably too concerned with personality. As an entertaining read it is too full of quotes, citations, and sidesteps to fill in the carefully researched details of yet another character in the plot – and sometimes not really in the plot at all.  I suspected Lady Fraser might be related to some of them.

I knew nothing about the Reform Act, save that it did something to reform voting arrangements in Parliament.

It came at a time when the aristocracy were nervous about events that had occurred across the Channel, indeed many were still harbouring displaced French aristocracy. Representation of the people was by the grace of the great landowners, most of whom could buy the favours of suitable people to stand up for their rights in the lower house, the House of Commons, while the upper house, was (and is) the House of Lords.  Many ‘Commoners’ were heirs to titles, or their younger brothers.  And only men who owned property could vote for them anyway.  The new centres of manufacturing, soon to be called cities, had no representatives at all, since they were not listed among the centuries-old parcels of land that drew representation.  Some of those parcels had no inhabitants now; they took the name ‘rotten boroughs’.

Well, my physical bookclub picked this book up as it looked interesting, but even those keen to read it said little good about it.  We all learned a lot about the history of the period, well, those who finished it.

The main problem is that Lady Fraser appears not to decide who is her audience.  She tackles the subject from so many points of view.  You can follow the interesting thread of Lord Grey throughout, with the twists and turns of politics, meddling and stirring by the new Unions and by the devilish press, spreading lies to the populace. She ensures that any bystanding Lord gets a full background about his family history, lands and voting cliques. Their wives had their characters assessed—or assassinated, along with their appearance and meddlesomeness rating (wives may not have had the vote, but they could make life very difficult for their husbands at times).

After trudging through the tedious and potentially boring first chapter, I learned to skim the diversions and concentrate on the main men.  This was not always easy, since some of those who later turned out to be important received scant description to start with.  It may have been because these weren’t the aristocratic ones.

But for anyone living in turbulent times—e.g. Brexit—it is painfully relevant.  MPs buying favours, the press spreading demonstrable lies. Total uncertainty throughout the land whether the ruling classes will pay any attention to the state of the families living hand to mouth. And the fear of revolution haunting those in power.

It kept me reading because I wondered how bad things got before it got better.  It also gave me further thoughts on the progression into chaos in the Princelings saga.  I seem to be going the right way with that; I obviously had a reasonable grasp of the sociological state of things and the sparks that cause revolution.

As with all digestible history, I find it interesting because it’s basically new to me.  I’m just glad I didn’t have to study it at school.  The detail that the author quotes, cites, and avers is enough to drive me insane.  Sometimes it felt like she was writing a thesis and had to support every assertion. It is readable, but only if you have the dedication.  Skip judiciously if you want a thriller, a novel, or a mystery (there aren’t many twists, by the standard of today’s political twists).  If you are a historical scholar, you’ll probably enjoy it—and checking the forty pages of references and index.

The bookclub gave it an almost unanimous six out of ten (from those who finished it). If you are keen to learn something very relevant to today from our history, give it a go.