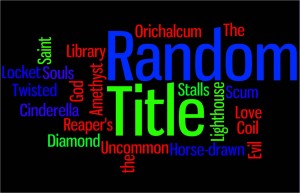 We Never Heard Them Coming is a type of Random Title or Must Include flash fiction offering. Chuck Wendig has been collecting titles, first sentences and last sentences from his readers, ten of each.  Now’s the time to select from them…. if you only use one of each once, you’ve got ten prompts.  Use them all with each of the others… a thousand stories.  Let’s take it from the top, using numbers 1,1, and 1 from the three lists, to make a 1000 word story.

We Never Heard Them Coming

“Listen to the goat,” Valerie said, “it will change your life.”

The goat watched me, chewing whatever goats chew, flicking an ear occasionally. I watched it right back.

“You can learn all you like about potions, unguents and powders,” she continued. “The goat has the Power, and none of your own talents will develop without its approval.”

“How long should I wait for it to talk?”

Valerie cackled. “That’s up to you. I’ll be in the storeroom if you need me.”

I heard her surprisingly light footsteps swish through the hay and sawdust as she left. One of the things that creeped me out was the mismatch between her appearance and her mobility. Walk like a teenager, look like a hundred years, and not well spent ones.

I shifted on my feet, wondering if the goat would mind if I sat. At least it was a change from the relentless grind the old witch had put me through ever since I’d come up from the valley. At first I’d enjoyed learning new things. Then the repetition got me down. Yes, I had to make a recovery potion in the twinkle of an eye in an emergency. Yes, there was sense in reciting all the uses of every ingredient in their different forms until it was second nature. But really, every day from pre-dawn to midnight? In summer?

When I’d muttered something about needing rest, she’d just said “the village didn’t send you up here to rest.”

True. The village was hard labour from dawn to dusk. Fighting the losing battle against the beehawks, cornweevils and armidilslugs. Grubbing round each plant, making sure they were kept at bay, tending each blade of corn, each leaf of the apple trees, each flower and pollinator. When you weren’t doing that it was hauling rocks, lifting wooden beams, shoving dirt around, all to keep our defences up and the buildings secured. For relaxation we ate and slept. Here I hardly ate and rarely slept—not enough, anyway. Yet, and this was the strange thing, I never even yawned, except when reciting from the books. That was tedious, not tiredness. Did she put something in my tea?

I sank to my knees in the hay, never taking my eyes from the goat. Then I just got comfortable and started talking to it to pass the time.

Nobody had ever listened to me before. I gave it the story of my life, including the time when Art Forrester had kissed me behind the barn door when we were supposed to be spreading the hay out. He’d suggested I spread my legs too, but I’d laughed and jumped out of the high door onto the hay cart below. I missed Art. We laughed a lot, and teased each other more. I’d been hoping we might be paired at the growing up ceremony, but I got sent up here instead. He’d been sent over the mountain to the watchout.

“Do you think we’ll ever be together?” I asked the goat.

It put its head forward and pulled another bunch of hay into its mouth. I watched it roll its jaw around, the golden strands gradually drawn up between the soft lips.

“If I get to go back down to the valley before fall, I’ll be able to collect enough of the herbs and beetles wings to make most of the potions through the winter. Do you think that’ll be enough? Will people accept me as the new healer?”

I let my breath out with a prr. It echoed me, and reached for more hay.

“What if the Markers come? Have I learnt enough to heal those that fight them? Why isn’t there a cure for the marks they leave, anyway?” 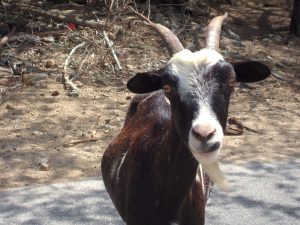 It moved around a bit, circling like a cat does before sitting down. Then it surprised me by sitting on its haunches, staring at me.

“I didn’t realise goats sat like that. I’ve seen you lying down and sort of curled on your legs, but never…”

You’re not the most observant I’ve had.

It chewed and watched.

I found my lips moving in sympathy.

I suppose I thought it would continue speaking, so I sat up and looked more attentive, like I was in class again.

Me, not observant? I thought I was. I could spot beehawks on the wing, could tell the difference between arglebots and berribots at twenty paces. I was always alert for the sounds of intruders, could pick them up from the restless movement of the trees and birds when they were approaching. ‘Early warning system’ the elders had said. That was why I’d gone up the mountain in the first place. I had the talent.

Maybe I didn’t have the talent after all.

Maybe I needed to observe more.

I looked at the roundness of its eye, the white markings, the reflections from outside. I looked past, to the way its hair grew, the poke of the hips through its hide. The grain of the wood of the stall behind drew my attention. Oakenwood, the strongest, the least likely to succumb to Marker attack. That was when I realised.

I stood up, stretched, and thanked the goat for today’s lesson. It was the first of many, but I learnt more that day than on any other. All the old woman did was nod at me, and continued with the potions lessons as before, until …

“Stop!” I said. She stopped swirling the pot. “The village is under attack.”

I ran down the hill, ready to leap to my people’s defence, and to salve them when the attack was past. Nobody had noticed; we never heard them coming.

That was the point. We could listen for the signs, for the restless birds, for the sounds of their wings and the tramping of their foot soldiers.

But using my newfound talent, I’d not heard them. We were prepared for them, for the first time.

7 thoughts on “#FridayFlash Fiction | We Never Heard Them Coming”