Mrs Frisby and the Rats of NIMH was a Book of the Month for the July/August period on the Great Middle Grade Reads Group.  We ended up with a shortlist of seven books to read over the summer.  A surprising number of members read four or more.  I managed three – you’ve already seen my comments on Counting by 7s and The Teacher’s Funeral.  Others are now on my TBR (sigh).  Although I restrained myself to keeping the other two to four Goodreads stars – I let this one rip into the fifth. The others may have been ‘better’ in some ways, but this one really rocked my boat.

Mrs Frisby and the Rats of NIMH 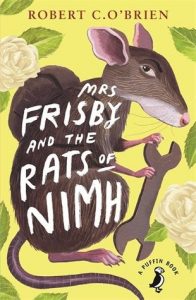 Mrs. Frisby, a widowed mouse with four small children, must move her family to their summer quarters immediately, or face almost certain death. But her youngest son, Timothy, lies ill with pneumonia and must not be moved. Fortunately, she encounters the rats of NIMH, an extraordinary breed of highly intelligent creatures, who come up with a brilliant solution to her dilemma. [Goodreads]

The blurb looked cute but interesting.  As you know, I am partial to the odd sentient small furry animal. I’m also unafraid of some anthropomorphism in my reading matter. What I found within the pages was something much deeper.  But the guide notes at the end implied that scientists no longer experiment on rats. I suppose that hit a nerve.

Mrs Frisby is somewhat Moley-like in her introduction to us – a homely character doing her best for her family and friends. Other animals in the woods have well-observed traits which lead to them helping or hindering her with her problems. Mostly helping her work towards solutions. The encouragement for her to approach the mysterious rats living under the rosebush comes from Owl, always the wisest denizen of the woods.  I loved the way the author moved this through from a simple problem to an ethical treatise.  In a tale told superbly well, full of mystery and tension, we discover how these highly intelligent rats developed.  It’s brilliant story-telling. The conflict with the owners of the farm, the people who come to exterminate the vermin, and the danger to Mrs Frisby and her family keep the excitement going.

Underlying this, the author has planted several strands of development for agile young brains, couched in a ‘using other people’s work’ ethic, which at the time avoids writing of the Silent Spring dilemmas.  These morality strands now extend into sustainable development; environmental footprint; finding one’s role in the community; diversity, and acceptance.

Two things jarred with me, neither of which are to do with the story itself.

The guide note suggested that we no longer experiment on rats (or other animals?). This is incorrect, although the reasons for animal experiments are much more stringent. They are now mostly far better controlled. It is unfortunate, but if we want to develop new medicines and treatments for the many illnesses we have, then animal testing as a precursor to human testing is seen to be necessary.  Equally, the only way it is possible to prove that chemicals out there are harmful to human and ecosystem health, is to provide independent data, which usually involves animal testing. Check with the Toxics team at WWF, which is where I take the guidance for this line of argument.

The second was simply I was dying to read more about the rats of NIMH. Goodreads lists it as the first of a series. Unfortunately, two years after Mrs Frisby and the Rats of NIMH was published, the author died. The subsequent books were written by his daughter, and have received mixed reviews.  So I won’t follow them up.

The magic is in the first one, and magic is sometimes found in small quantities. It’s an excellent book, and not as old-fashioned as it might seem.

Gasp of the Ghoulish Guinea Pig by Sam Hay

Book Review | Mrs Frisby and the Rats of NIMH