Why I’m mapping the Realms again

Once I got on to book 6, Bravo Victor, I knew the Realms were starting to develop, especially away from the tunnel network that linked the most important castles.  With the development of new forms of transport, the connections changed as people moved about more.  Also, there were places Fred missed off his first map. 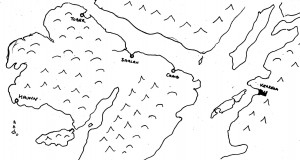 In book 7, Willoughby not only travels extensively, he talks about a whole load of places that have not been explored before, journeying up to the north and back again.  He discovers places in the Realms that even I hadn’t heard of until I wrote them.  Dylan and Dougall, the Princelings of the North, had their own map of their island, which first appeared in their short story Dylan’s Yuletide Journey. In the forthcoming book 8, they travel from their island home all the way down as far as Vexstein. Prince Kevin carries on south to Castles Deeping and White Horse, which featured in book 5.

So it’s time for me to translate King Fred’s beautifully drawn map of the North into digital format.  I see he’s also working on an update to the southern map, too – or at least delegated it to one of his team. I wonder if they’ve now added a Guild of Mapmakers to the professions in the Realms?

Some of this interest in maps was revived by a brilliant piece of work reported by Atlas Obscura. I recommend this site to most of my readers, because I know you like hidden fascinating things in our world. The article in question reports on a cartographer, Sasha Trubetskoy, who made a transit-style map of the Roman Empire. Then he did one of Roman Roads in Britain in response to clamour from his fans, according to Atlas Obscura. 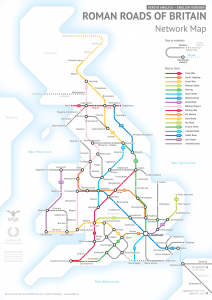 I’ve never done a study of Roman Roads, but they sort of seep into my consciousness. That’s partly because I’ve lived near a few, but I’ve also travelled on many. It’s hard not to, in England. Some of our major roads are built on top of them, and other routes are useful to know. Ermine Street, for example, is a quick route for people driving from London to Lincoln and Hull, avoiding the congested motorways!

To a great extent I built the idea of the Realms’ tunnel system on the London Underground (which I’d used since I was 11 to go to school and then work). I tried early on to do a map such as Trubetskoy achieved, but found it difficult, partly as I’d got some lines crossing.  Making underground/overground crossings and a few junctions helped, but Willoughby’s travels call for more. Where I avoided what is now a motorway, I fell back onto the Roman Roads!

Mapping the Realms in October

October is a good time for me to start mapping the Realms (North), because I’m also taking part in #Inktober again. I did this last year, when I was illustrating books 7 and 8; the idea is to do a drawing a day throughout October.  I want to learn to use my iPad for drawing. It will reduce the workload in transferring the pictures to the computer, and allow better shading, especially for night scenes.

Whilst my illustrations should fit in the iPad screen at full size, the map won’t do that.  Once I get handy with the pen and screen tools, I hope I’ll be up to tackling the larger project.  Perhaps I’ll start with an update of the southern map before I go for the new one.

If you want to follow my #Inktober sketches, you will find them on Twitter with the #Inktober hashtag (or at @jemima_pett), or on my Pinterest #Inktober wall.

Mapping the Realms – a job for #Inktober

2 thoughts on “Mapping the Realms – a job for #Inktober”