Two Norfolk crime novels were among the books I read in the Tackle TBR Readathon in September.  The Outcast Dead is the sixth Ruth Galloway novel by Elly Griffiths, and A Siege of Bitterns is the first Birder Murder Mystery by Steve Burrows.  Both were mainly set in the north Norfolk coast, where eerie and desolate marshes abound, and Burrows made much of places I know well, like Cley (pronounced Cly) and Titchwell.  The first is a Norfolk Wildlife Trust reserve—their first, and it celebrated its 90th anniversary last year – and Titchwell is the RSPB’s (equivalent of the Audubon Society) premier site in Norfolk (with due respect to the others).  I’ve promised my local birdwatching society a copy of my review for its newsletter, and may have to change some of the wording a little for the wholly committed birding audience! I don’t know whether they like Norfolk crime novels, but the editor is always in need of articles. 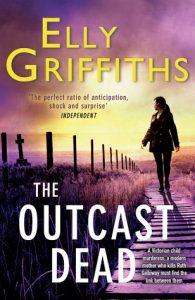 Forensic archaeologist Ruth Galloway has excavated a body from the grounds of Norwich Castle, once a prison. The body may be that of Victorian murderess Jemima Green. Called Mother Hook for her claw-like hand, Jemima was hanged for the murder of five children.

DCI Harry Nelson has no time for long-ago killers. Investigating the case of three infants found dead, one after the other, in their King’s Lynn home, he’s convinced that their mother is responsible.

Then a child goes missing. Could the abduction be linked to the long-dead Mother Hook? Ruth is pulled into the case, and back towards Nelson. [from Goodreads]

If you’d like to check my review of number 5 (the one not set in Norfolk) do so here.  There are a few items of relevance, such as the transfer of one of the staff from the Lancashire force to DCI Nelson’s team.  Ruth’s baby is growing up, but calls everyone dada, pleasing some, and giving others heart attacks in the presence of their wives.  The world-building is solid, believable, and I’m fully entrenched in it.  So my review may be biased.

I was hooked straight away with this one, with its potent mix of dead babies (cot death or something else?) and the ghoulish glee that an archaeology tv programme maker exudes when talking about the discovery of the remains of a notorious murder. Roping Ruth in to be the programmes expert upsets her boss, who is preening himself for the role.  Ruth, who is trying to avoid it, is therefore the ideal person for the camera.  It’s all so enjoyable, especially when we have so many preening erks on tv, and a dearth of intelligent commentators, most of whom are pilloried in the press.

The story is perfect, with the usual twists, turns and red herrings, and not just in Ruth’s love life.  Better than ever, or back with a vengeance (except Ruth is not the vengeful sort), are the sort of headlines I’d like to see. I spent a very late night on my two sittings for reading this. But I twitched any time anyone mentioned the dead Jemima! An easy five stars. Newly appointed police inspector Domenic Jejeune doesn’t mind ruffling a few feathers. Indeed his success has elevated him into a poster boy for the police. The problem is Jejeune doesn’t really want to be a detective at all; he much prefers watching birds.

Recently reassigned to the small Norfolk town of Saltmarsh, located in the heart of Britain’s premier birding country, Jejeune’s two worlds collide with the grisly murder of a prominent ecological activist. His ambitious police superintendent foresees a blaze of welcome publicity, although doubts soon emerge when Jejeune’s best theory involves a feud over birdwatching lists. A second murder does little to bolster confidence.

Jejeune must call on all his birding knowhow to solve the mystery and deal with unwelcome public acclaim, the mistrust of colleagues and his own insecurities. For, in the case of the Saltmarsh birder murders, the victims may not be the only casualties…[from Goodreads]

The second of my Norfolk crime novels is from an author who is also a keen birder. What’s more he lists a great many authorities he used for his research, so any quibbles I had during the technical side of the murders in this book are probably because I don’t know as much as I think I do.  There’s still one bit of science I want to double-check, and it is key to the plot, so I should.  I expect he’s right. Which is a warning that there’s a fair amount of technical detail of interest to ecologists, ornithologists and environmentalists in this book. Fortunately, I know a few of those, and it’s nice to get things we care about wrapped up in a fairly good crime mystery.

That sounds a little more lukewarm than I felt while reading it. The lack of distinction between birders and twitchers irritates me, as always.  Twitchers go everywhere to ‘nab’ a bird—add it to their species [seen] list.  Birders just enjoy watching birds, although many keep records of what they’ve seen, and when, often to compare what’s at a certain place year on year. The key to this book is the lengths to which a twitcher will go.

There are a great many people involved, some of whom I mixed up from time to time, and there are some leaps of faith from the detective Jejeune which seem totally unjustified. Thankfully, his team agree, and deliver a good bit of police work to prove things one way or the other.  Police procedural it is not, but procedures are discussed. Twists, turns and red herrings are plentiful, perhaps too many, but the use of a second narrator, one of the other police operatives, relieved my suspension of belief and got me onto solid ground again, even in the middle of the saltmarsh.

Great descriptions of the countryside, plenty of action, and even a good car chase—in Norfolk! And a red herring which I spotted right at the start but didn’t quite work out because I was too lazy to double-check my facts.  Excellent work, author!!  A four star read from me, which is very good indeed.

Want more Norfolk crime novels? see my reviews of The Crossing Places (1) and A Dying Fall (5) in the Ruth Galloway series, and when I met Elly Griffiths the first time, at Noirwich.