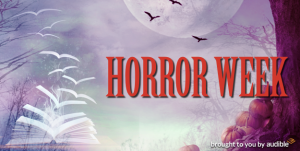 Sounds of Silence is my contribution to Goodreads Horror Week this week 16th-22nd October.  There were a dozen prompts, and I felt one of them was more up my street than the others.  You know I don’t write horror, but I hope this is suitably unsettling.  With regard to the ‘personal details’ post the other day, this contains all sorts of true sounds from my house.  Fortunately only the one with the hay involves the guinea pigs! This is under 750 words.

The Sounds of Silence

At the end of moving day, I fell into bed, exhausted. I thought I’d be out like a light once my eyes closed. As I relaxed, I noticed the strange new sounds of the house. I knew that every heating system sounded different, every board creaked in its own way, the eaves would whistle a different tune in a wind, but still, it was strange. My house, at last.

Over the next few weeks I started to identify the natural sounds. New ones, like my guinea pigs chewing on pieces of hay and tapping the sides of the cage, made me smile. How could I know that my new friends would make such delightful noises as well as odd scratching sounds. The banging in the pipes I tracked down to the dishwasher, where the pump probably needed replacement. As the nights drew in, I realised that my lights hummed quietly to themselves, and clicked for a few seconds when turned off. Playing music solved the humming problem, but the TV developed a high-pitched whistle. I could only detect it my turning my head from side to side while watching the screen.

By late October I felt besieged by these small sounds, and fought against them by having music sources in each room. The clock in the hallway struck its notes day and night to keep something else at bay, little scuttling sounds I though might be mice. I set up humane traps all around the skirting boards, and occasionally caught a small brown rodent with a short tail, carefully taking the closed trap up to the woods to release the creature out of harm’s way.

The sounds were more prominent at night, though. I set the radio on ‘sleep’ to mask the tapping, sighing, clicking orchestra before the pills took hold.

A week after Halloween I heard the noise of laughter, glasses chinking, and footsteps. I got up, went to the window to see if my neighbours were partying. All was silent outside. The moon cast its silver light on frosted grass, and I feared what lurked in the shadows. The laughter faded, I got a stiff drink and went back to bed. Had I read something too lurid, or eaten cheese too late? I didn’t think so.

I know what I thought it was.

Next morning I pulled out the solicitor’s paperwork from my house purchase. We had negotiated such a good price for it. Had we missed something? I checked the disclosure forms, and wondered about the deeds. The previous owner had ‘moved away’. I asked my neighbour about him. She looked at me, stepped back, shrugged, and said he’d gone into hospital. Did she know which one? No. She turned abruptly and went back inside.

Somehow the heating didn’t seem to be making any difference to the chill in the living room.  Christmas was fast approaching, and I’d invited friends to stay. I bought new mobile heaters in case they weren’t warm enough. I shivered each time I changed rooms.

The night I first heard the small child giggling, then singing quietly, was the night I heard someone moving furniture in the living room; the guinea pigs were squealing, a noise suddenly cut short. I ran downstairs.The silence that met me was appalling. Two small furry bodies lay stretched out in their cage, eyes wide open—in terror, it seemed to me. No sign of injury. Just limp, lifeless bodies. I screamed and wept over them. Such little lives, so short. Such trust and friendship that I had betrayed. As I cuddled their cooling forms, I heard the giggling again. Then it turned to whispering, in a high-pitched voice, lisping but indistinct.

Silence. Whatever made the noise was shocked that I had spoken. Maybe nobody had addressed her before.

It was quiet that night. I know, because I was wide awake, that night and the next. I buried the bodies in the garden, and vowed my revenge.

Even now, from my hospital ward, I plan my revenge. Every time she giggles, I shout at her.  Every time she whispers or sings I shake my fist at her. My brother made me sign the forms to give him power over my finances. I think he’s selling the house. I don’t care. As long as I can make her go away, all will be fine. Unless someone else moves in, and I die, when she’ll start on the next owner.

Watch out for Trick or Treat Reads for one day only (from Australia to California, so about one and three-quarters, really) on 31st October. Free books galore!  Still time for authors to join in the blog hop!