Time to go down the TBR Hole again. In August I did the first sweep at reducing my To Be Read list using the strategy devised by Lia at Lost in a Story. Then I did it again, and took the same number out… and ended at the number I had the first time around – 533. In October it had risen again, I took another three out, and ended at 535.

My starting total this month was 553. Where do they come from? I’m doomed!

Reminder: the format for these posts is an abbreviated blurb (usually one paragraph), then the second paragraph is my deliberations.  Finally, there’s the verdict.

Down the TBR Hole: in which Jemima finds herself in more trouble

Starting point…553 books.  A lot of this batch are in the 200s, which means I’ve kept them relatively highly ranked in past reviews

Prince Aleksander, would-be heir to the Austro-Hungarian throne, is on the run. His own people have turned on him. His title is worthless. All he has is a battletorn war machine and a loyal crew of men. Deryn Sharp is a commoner, disguised as a boy in the British Air Service. She’s a brilliant airman. But her secret is in constant danger of being discovered. With World War I brewing …

The Speed of Dark by Elizabeth Moon

In the near future, disease will be a condition of the past. Most genetic defects will be removed at birth; the remaining during infancy. Unfortunately, there will be a generation left behind. For members of that missed generation, small advances will be made. Through various programs, they will be taught to get along in the world despite their differences. They will be made active and contributing members of society. But they will never be normal.

This is an autism related science fiction book by a respected scifi author, whose work I have only read when she’s been co-writing with the late Anne McCaffrey.  I know I want to read some of her work. 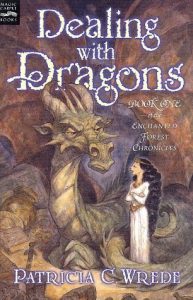 Cimorene is everything a princess is not supposed to be: headstrong, tomboyish, smart – and bored. So bored that she runs away to live with a dragon – and finds the family and excitement she’s been looking for.

It’s got great reviews, but I was dithering.  I mean, it sounds… trite.  Then I saw this quote.

“I didn’t ask what you’d said about it,” the frog snapped. “I asked what you’re going to do. Nine times out of ten, talking is a way of avoiding doing things.”

The Time Cavern by Todd A Fonseca

THE MYSTERY BEGAN A HUNDRED YEARS AGO. IT WAS NEVER SOLVED. NOW IT’S HAPPENING AGAIN.
Ten-year-old Aaron moved from the big city to the country where he met a know-it-all farm girl who said his house is haunted. The Amish boy who had lived there before disappeared after claiming to hear the wind call his name. Aaron knew she was just trying to scare him–she was doing a good job too because the night before Aaron heard the wind call his name.

Something one of the reviews said piqued my interest again.

Earwig and the Witch by Diana Wynn Jones

Most orphanages are horrible, but Earwig has a surprising amount of power over everyone at St Morwald’s Home for Children, and loves it there. The last thing she wants is to be adopted by the very strange Bella Yaga, demon-attended Mandrake, and talking black cat Thomas. Earwig wants to learn magic, but will need all her ingenuity and help from a familiar to survive.

This is a popular book in the UK, and the review from Christine M, whom I respect, was great.

Verdict: Keep, although whether I ever get around to it is another matter. 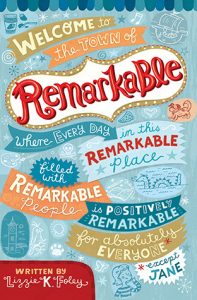 In the mountain town of Remarkable, everyone is extraordinarily talented, extraordinarily gifted, or just plain extraordinary. Everyone, that is, except Jane Doe, the most average ten-year-old who ever lived. But everything changes when the mischievous, downright criminal Grimlet twins enroll in Jane’s school and a strange pirate captain appears in town.
Thus begins a series of adventures that put some of Remarkable’s most infamous inhabitants and their long-held secrets in danger. It’s up to Jane, in her own modest style, to come to the rescue and prove that she is capable of some rather exceptional things.

More recommendation from people I like. It sounds good.

Ten years ago, the tiger King and Queen of a vast forest disappeared in a mysterious fire. No one knows how the fire started. In ten years, the truth has never been discovered. But now, ten years later, their orphaned daughter is determined to solve the mystery…
Ten-year-old Saderia has led a life of luxury as the Princess of the forest under the care of her persnickety aunt and uncle – though it has always had its flaws. But when her nights are troubled by terrifying dreams of the fire that took her parents, her comfortable life is turned into a race to find the truth. On a quest to solve the mystery of who killed her parents, she stumbles upon bewildering clues, secretive allies, and even magic.

I think I can give this one a miss.  Even if the author did write it when she was twelve.  I suspect I put it on for that reason (and the reviews are excellent)

When the body of a murdered teenage boy is found in the forests of northern Minnesota, FBI Special Agent Darren Lockhart is sent in to investigate. Believing this death to be another in a string of bizarre executions, Lockhart soon finds himself isolated in the north country and facing a city that not only fears the killer, but also the federal agent there to protect them. A life of chasing America’s worst criminals has taken it’s toll and with the end of his career looming, Lockhart has just one last chance to catch a maniac that has eluded him for over two years. Set in the beauty and serenity of northern Minnesota, “Crazytown” is a story of deception, murder, and betrayal that will change Lockhart’s life forever.

I thought I’d better check my Kindle in case I already owned this one. It sounds like Fargo, which I wanted to watch, but didn’t. I wonder whether I’ll get back to reading this type of gritty thriller at some stage in the future.  Well, if I do, I’m sure there’ll be plenty to choose from. 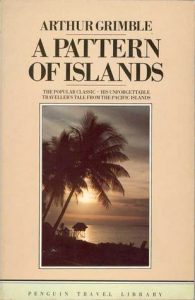 A Pattern of Islands by Arthur Grimble (non-fiction)

The funny, charming, and self-deprecating adventure story of a young man in the Pacific. Living for thirty years in the Gilbert & Ellis Islands, Grimble was ultimately initiated and tattooed according to local tradition, but not before he was severely tested, as when he was used as human bait for a giant octopus. Beyond the hilarious and frightening adventure stories, A Pattern of Islands is also a true testament to the life of these Pacific islanders. Grimble collected stories from the last generation who could remember the full glory of the old pagan ways. This is anthropology with its hair down.

I think I’d enjoy this.  Will I ever get around to it?

The Dinosaur Games by Christopher Gordon

One week ago they took Jack’s neighbours.
Six days ago his parents.
Five days ago his brother.
Four days ago the girl he loves.
Three days ago he surrendered to them.
Two days ago Jack rode his first T-Rex.
Yesterday they made him a Gladiator.
Today he’ll save the girl he loves even if it means his own death.
Tomorrow they’ll wish they never let Jack Reaper enter the Dinosaur Games.

It sounds fun, but I think I can give it a miss.

There we are, another trip down the TBR hole, and another three books removed.  Well, at least I’m consistent.  But I should warn you that I went into Waterstones last week and saw hundreds of books I wanted.  Is it bibliomania, or do I actually want to read them?  Is there any hope for me?  Then again, what’s wrong with having hundreds of books one wants to read?