Science and Islam was a book I’d added to my wishlist a while ago, that my brother gave me for Christmas, probably in 2016. It’s a non-fiction book, making it my fifth non-fiction book of 2017, and thereby keeping me on schedule for my Non-Fiction Adventure Reading Challenge. 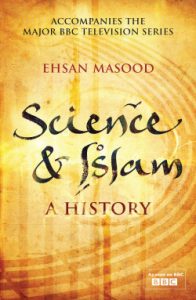 Today it is little acknowledged that the medieval Islamic world paved the foundations for modern science and the scientific institutions that now form part of our everyday world. The author provides an enlightening and in-depth exploration into an empire’s golden age, its downfall and the numerous debates that now surround it. [Goodreads]

I have an interest in the history of science and technology. I always knew the Arabs had been active in maths and astronomy, but little else of their culture. This helped.

The book has three sections: an overview of the development of Islam, the science and technology developed and the effects of later scholars. It starts with the Islamic Empire between the Roman Empire and the Renaissance –  in European history this is ‘the Dark Ages’.  I found this useful, but got confused by the amount of jumping around in dates.  I was distracted from the author’s theme with the jump of 200 or 800 years between one assertion and another.  What this did explain was the gap in mine and most English people’s schooling; I had no background in anything but European culture from school.  It’s like nothing happened between the Romans and the Renaissance. Clearly – it was all happening further south. If you live in Spain, you probably know that, since Cordoba was one of the main centres.

The author explores the links between science, religion, power and ostentation very well.  Those in power valued knowledge not just for its own sake—although that was important.  Rulers sponsored science both to say ‘my scientist is more knowledgeable than yours’ and ‘I am a powerful ruler who is wise enough to be a patron of science’.

It also helped that knowledge of the stars helped astrological predictions, but also guided important things like crop planting, and when rain might be due.

Medicine was practised in comparatively advanced hospitals. Many medical techniques were used right up until Victorian times.

Mathematics developed through algebra (an arabic term) and trigonometry to calculus, all part of practical matters.

Islamic scientists freely referenced the work of the great Greek scholars. That tradition of scholarship continued, referencing other sources, even if western scholars of the eighteenth century onwards pooh-poohed Islamic work as ‘copying’.  That might just have been because Newton and so on developed their ideas independently 800 years later.  Copernicus was wiser, and referenced his Arab predecessors’ work on the relationship of the earth and the sun.

I was a little disappointed by the second section.  It more or less listed great technological developments with little more to say about them.  I constantly thought “and…?”  Maybe the reference works have not survived to tell more of the machines and their development.  The third section reverted to discussion about the roles of science in the later stages of the Islamic Empire. By then it had dispersed into many centres, ruled by a number of families, the basis of todays’ schisms.

So, Science and Islam was interesting, digestible, but a little light in parts and heavy in others. Lumpy, in fact. It could be because it accompanies a TV series I didn’t see. I think I’d like to see it.  And that, I suppose, is a good word for the book, which I gave three stars.

3 thoughts on “Book Review | Science and Islam by Ehsan Mahsood”