I read Zero Sum Game late last year, and dithered over including it in my round-up at the year’s end. As I thought of what to say, I realised I had really enjoyed it. It’s on-theme with my new aim of reviewing mainly books that fit with my likely readership’s tastes. 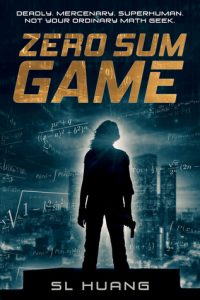 The vector calculus blazing through her head lets her smash through armed men twice her size and dodge every bullet in a gunfight. She can take any job for the right price and shoot anyone who gets in her way.

As far as she knows, she’s the only person around with a superpower . . . but then Cas discovers someone with a power even more dangerous than her own. Someone who can reach directly into people’s minds and twist their brains into Moebius strips. Someone intent on becoming the world’s puppet master. (more) [Goodreads]

This started out interesting, rocketed into fast action, swept through into ‘hey, that’s weird’ and crawled out from under the debris with “wow!”

As the blurb indicates, Cas is good at math.  So good, that she can send a bullet ricocheting off various surfaces where she’s calculated for hardness, rebound angle and flexibility of moveable objects.  She can shoot round corners, no problem. Cas usually takes protection type jobs, or occasionally search and rescue, where the search is for someone abducted, rather than lost by accident.  She has very few friends, and she prefers it that way. The characterisation is perfect.  The few friends she has are pretty good too.

The friend she hasn’t got is also an interesting case, and I’ve discovered I’m interested in how this all develops.  The plot thickens satisfactorily, twists and turns a few times, and the friend she hasn’t got goes in and out of favour a few times.  Doubts over who can be trusted, concerns about the bigger picture, and an antagonist with a massive secret… it all adds up to a very convoluted tale that still hangs together.

I’m aware I’m not reviewing this very clearly – it’s partly because there is so much going on I don’t want to spoil it for you. Part-cop, part-vigilante, part-dystopia, part-heist, part-X-men.  Maybe it’s The Sting meets Blade Runner.  I’m not sure.  What I do know is the more I think about Zero Sum Game the more I want to read the next in the series. Even if it doesn’t begin with Q, X or Z, since this was 2017’s Z in the Alphabet Soup Challenge!