Everything is Lies came to me via Netgalley from Michael Joseph publishers thanks to my enthusiastic review of Dear Amy, probably my Book of 2016. Helen Callaghan’s new book is out 22 February, and it’s a great follow-up (not a series). 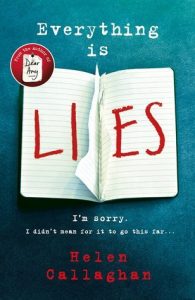 No-one is who you think they are

Until the day she arrives at her childhood home to find a house ringing with silence. Her mother is hanging from a tree. Her father is lying in a pool of his own blood, near to death.

Especially those closest to you

The police are convinced it is an attempted murder-suicide. But Sophia is sure that the woman who brought her up isn’t a killer. As her father is too ill to talk it is up to Sophia to clear her mother’s name. And to do this she needs to delve deep into her family’s past – a past full of dark secrets she never suspected were there . . .

What if your parents had been lying to you since the day you were born? [Goodreads]

I’d forgotten the blurb, which has a major spoiler in it, for me at any rate.  I was admiring phrases such as ‘mascara running making me look like a moody panda’, and feeling the tension build as our heroine’s lifestyle of excess came closer and closer to disaster.

For the first fifty percent we were dropping between Sophia’s distress over many things, not least her father’s coma, and the mysterious book accepted for publication, according to a letter Sophia finds.  At one stage I felt that reading this manuscript (as Sophia does) was not really what I wanted to do: it’s naively written (in keeping with the fictional author) and somewhat predictable.  But before I returned to my reading, I realised it was a brilliant way to get out of flashback and to introduce all the prospective villains of what I already felt sure was the most foul play.

Everything is Lies is a pacy thriller, which I’d rather class as suspense.  I had guessed too many of the lies at that halfway break, but the suspense is in finding out just how bad it can get before you discover whether you were right.

Helen Callaghan’s writing is bright, tight and pulls you on into the depths of the plot.  Little signs that make you think, but you brush aside as mere fancy.  I read it in three sittings, desperate for my battery not to run out before I reached the end (despite the dire warnings from my Kindle).

It may not be as supremely gripping as her first book, Dear Amy (top book – read it!) but it’s a great follow-up.  I’ll be watching for more from Ms Callaghan! (and I’ve been singing its praises in a bookshop, my library, my bookclub…)

Want to know how the Princelings of the East all started?  You could, with Books 1-3 from Smashwords, special price only $2.99 until the end of February.

You could start with book 4 – a prequel but a spoiler for Book 1 🙂  Goodreads giveaway for worldwide exc. USA ends 20th Feb.

The Traveler in Black and White

Book Review | Everything is Lies by Helen Callaghan

One thought on “Book Review | Everything is Lies by Helen Callaghan”