It’s Flashback Friday and it is not the equinox – that’s next month.  But I am off travelling to cold places again; I’ll miss next week, although I’ll post you something in advance. So if you want to join in on Flashback Friday, please do – add your link to my comments, and sign up with your blog on the Flashback Friday page.

I’ll give you the introduction from March 2015, as well…

It’s the spring equinox, and I’m off travelling.  Chuck’s challenge of the week is a randomly generated cocktail, and I think an Equinox on Ice would do well for that, although, I won’t get to link it on his blog.  This is what I think my trip will be like. I’m keeping my expectations low.

The wind was driving across the landscape, rolling grains of sand-ice across the frozen lake.  The snow content had fallen, but at thirty miles an hour it subtracted another ten degrees from the already wind-chilled atmosphere.

The white bears padded about despite the abating storm.  It was spring in the Arctic, and they had mouths to feed. Hibernation was no laughing matter, and their reserves of fat were long gone.  Drawing on unknown sources of energy, they snacked on groggy voles emerging into the daylight, now that dawn was rapidly heading to meet dusk.  It was equal day and night time, and would soon be constant daylight.

On the west side of the lake, some Arctic foxes barked a warning, swiftly followed by the growing buzz of the skidoos that the two-legs used to get around Svalbard, 800 km from the North Pole, but nevertheless an arctic waste.  The rumour had already spread around the animals in that world; dozens of extra planes had been arriving and departing all week, and the towns were stuffed with humans. Now they were interrupting the peaceful hunting of the residents, and all for what? 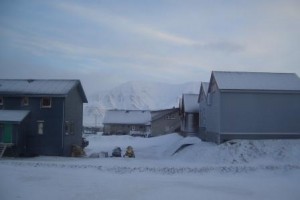 For the humans, the storm’s abatement was a promising sign.  The weather forecast had been iffy, to say the least. 100% cloud cover the past three weeks, and a slight chance of sun at some stage today.  Some stage. The thousands of tourists that had descended on the town of Longyearbyen, filling every hotel, guesthouse, hostel and private space in people’s homes, were there for an hour of anticipation, two minutes six seconds of awe, and another hour of anticlimax.  A total eclipse of the sun, visible only in a small arc between Greenland and the north of Scandinavia.

Early arrivals had hoped to catch a glimpse of the aurora borealis during the twelve hours of darkness here in the high arctic, where the solar wind excited the earth’s magnetic field, sparking oranges, reds, greens and blues as it energised the gases of the atmosphere.  They stood outside with their cameras on tripods, waiting and hoping for the clouds to clear and allow them a view of the spectacular lightshow above. Each night they returned to their accommodations disappointed.  The clouds were moving fast, but there were plenty more behind.

Now eclipse day had arrived, and the parties spread out to places long-since scouted to enable the paying guests, who had, after all, invested thousands of dollars in their venture, the best chance of witnessing that phenomenon most treasured – a annular total eclipse, the moon’s shadow covering the disk of the sun so neatly that a ring of fire surrounded it; the sun’s corona exposed in all its glory.

The tourists gathered in their little groups, scientists set up their instruments, nearly everyone set up their cameras.  Guards with rifles patrolled the groups just in case a polar bear got the wrong idea.  The bears sloped off, waiting till the noise and kerfuffle had gone and they could pick among the remains.  Except one or two.  The most hungry stayed on watch.  They noted the guns and the patrol pattern.  They noted the humans wrapped in their layers of inedible material.  They noted the snacks and lunchboxes.  They waited.

The light began to fade.  The wind dropped a few miles per hour.  The tourists jabbered and then withdrew into their own thoughts.  Silence crept over the landscape like an eiderdown.  The bears shifted, uneasy at the change in the light.  The foxes crept off to their dens.  The few birds made for shelter, disturbed by the untimely dusk.

Tourists gazed to the clouds, holding strange sunglasses unused by their sides, trying to work out where the sun was.  Would there be a break in the cloud?  Would they at least thin enough to see the sun’s disc?  The light levels continued to fall, as off in the southeast the moon crept in front of the sun’s face.

The last light illuminating the clouds went out, and darkness descended as deep as any cloudy night with snow on the ground.  Uncanny light, almost as if the ice stored its own sunlight and reflected it to the clouds themselves.  The tourists shifted uneasily, still praying for the cloud cover to thin, just enough to see the totality.  A minute passed.  Then two…  and the light changed again.

The bears, disorientated by the untimely darkness, had started to prowl.  They could see some tourists who had moved away from the group to enjoy the peace and wilderness more fully.  With audacity born of hunger and frustration, the bears bounded forward, cutting the humans off from the rest of their group.  As the light returned, the guards resumed their patrol, unaware of the rogue group separated by the bears – and now by a spur of hill and jumbled ice bordering the frozen lake.  Sound carries in the arctic waste, but not so readily downwind of a large group who are bemoaning their bad luck at a total washout of an eclipse.

The guards missed the bears.  And the tour guides did not miss their customers until they counted the group back onto their skidoos.

They may not have seen the eclipse, but for some it truly was a once in a lifetime experience.

Just a reminder… the last few Princelings of the East series Goodreads giveaways finish in the next few days.  Bravo Victor, Willoughby the Narrator, and The Princelings of the North all finish on Wednesday Feb 28th.  The Talent Seekers finishes tomorrow night.  So far, winners have come from Canada, Brazil, Portugal, Greece, and UK.