Dining Out Around the Solar System is the first in the series of the same name.  I read the second one first – Dining Out with the Ice Giants, and I recommend every reader does the same. That was ABSOLUTELY BRILLIANT, to use a Journalistic device known as a screamer.  Book 1 is a work of literary scifi of epic proportions. Its length requires dedication. You probably only have that dedication if you have already fallen in love with these characters. Why have I had so many weighty tomes in a row (or so it seems) – first Beasts… then Gnomon, now this.  It certainly slows the rate of reading down.

Dining Out Around the Solar System 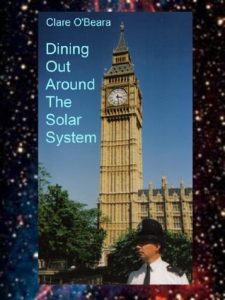 JUPITER’S BOUGHT THE DOME!
Donal, an Irish lad, and Myron, a Cockney-Jamaican mix, meet aged seventeen as book reviewers and trainee journalists. Before long they’re onto the hottest stories in London.
DEATH CAUSED BY CAFFEINE
In their future, Stansted Airport has been converted to a space shuttle base and Londoners are recruited to mine the asteroids.
AHOY NEPTUNE! ESTUARY BOMBS TO BE CLEARED
While exploring the other planets, we found that they were all inhabited. Now those people are coming to Earth and looking for work. They’re also opening ethnic restaurants in central London.
THE SMOKING GUN
Befriending immigrants makes Donal and Myron unpopular with some, while their investigative reporting lands them in trouble with wealthy organisations, criminals and the Home Office. Their romantic prospects are compromised. But you can’t keep a good team down, especially when they report for London’s Eye, and they’ve got every book ever digitised at their disposal….
STOWAWAYS FROM SATURN [Goodreads]

I confess I did a double-take when I saw the Kindle edition listing Dining Out... as 1200 pages long.  Then my Kindle told me how long it was going to take to read it. Then it switched to break it more gently, saying it was only 3 hours 48 mins to the end of the chapter.  By contrast, I’m currently reading a novel that had 3 hours 48 mins to the end of the book at my first break.

The first good thing about what amounted to a whole week of reading (three or four hours a day) is that the writing is elegant and easy on the eye.  Each character (every last one of them) is beautifully deep, and has a life outside the immediate story (although later I started to forget who was whom).  This is total immersion in a near-future London where indigenous people from other planets come to visit, work and live (the use of ‘alien’ is considered an ‘n’ word). The facts and figures about how our current and historical policies and practice have brought us to this fairly dire and stratified society are perfectly accurate and elegantly taken to their logical conclusions. They bind social, political, environmental and technological developments* together faultlessly.  If only our politicians and their minions worked through their policy implications as diligently.  And Clare O’Beara writes it like a dream: Donal is an English Lit graduate of Cambridge and Trinity Dublin, and it shows.

They head off to find scoop after scoop, simply because they dig below the surface when rootling around for ‘local news’, battering me with stuff I know about.  It’s almost like Ms O’Beara is trampling through my life skills.  And then she throws in knowledge I picked up from my (late) brother, who did things like retrieve bombs from underwater wrecks.  How does she do that?  I’ve spent a lifetime acquiring all this stuff, from energy efficiency in housing and the dire state of the UK’s Victorian and post-war housing stock, through the secrets of the ghost-lines of the London Underground (sorry, I’m still a pre-TfL girl).  She even follows me out to Epping where she houses the Martian workers.  I was going to say there were no Martians there when I was, but come to think of it, there were some slightly strange characters…

The trouble with these lovely episodes of Donal and Myron’s lives? They roll on, day after day, with no discernible plot.  There is love interest, danger, pathos, hardship, reward, but it’s all very level.  The reader knows that, or trusts, the author will bring us to an epic conclusion, tying up all sorts of strands into some momentous climax.

And so she does.  The climax is epic, wondrous, and beautifully executed.  But she just couldn’t stop there; she had to finish it off with another beautifully lyrical description of life in the modern solar system.

If you have not read the second in the Dining Out series, you may find this hard work, and wonder whether to continue.  You should.  Just take it as a very different science fiction or alternative universe from that you’ve already read.  This is London as you almost know it.  It just has different immigrants from those you’re used to.  The press are as pushy, the politicians just as greedy. Donal and Myron are a fantastic guide to their universe.  I gave it five stars on Amazon, four on Goodreads, but I’d still recommend reading the second book first.

The good news is that there’s now a fourth out!

Epic tale of journalism in a near-future London. Could also get tagged crime and suspense, but a little too drawn-out for the genre. Brilliant, but best read second 🙂

One other thing I realised from this. I love London. I know I got tired of it when I worked there, but really, I love the vibrancy of it, which shines through in this book. You know how much I hate it when authors get London detail wrong. This book (series) is perfect. Maybe I should write some London stories.

* The trouble with technological developments is that they change so fast.  Some things that were totally innovative when I read the second book are things even I’m using now.

If you’ve been following my epic Goodreads Giveaways for the Princelings series, they are about to draw to a close.

and the reason for all the fuss – the launch of book 8, the Princelings of the North, also ends Wednesday.

And the special offer on all the books in the series ends on March 1st (or even late on Feb 28th if your store filters the changes quickly), so act now!

Book Review | Dining Out Around the Solar System

4 thoughts on “Book Review | Dining Out Around the Solar System”