Three Men in a Boat was suggested by one of our bookclub members.  We wanted a classic read, and I welcomed this one rather than Jane Eyre or Charles Dickens. (Although I do want to reread A Tale of Two Cities).  Rather than take the copy from the library, I downloaded the free copy from Amazon.  This has the disadvantage of minor formatting issues so that a description of the missing illustration runs into the paragraph. Once you get used to that, it’s fine. 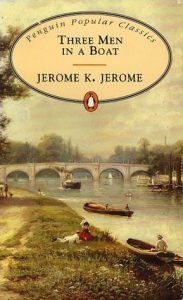 Three Men in a Boat

Martyrs to hypochondria and general seediness, J. and his friends George and Harris decide that a jaunt up the Thames would suit them to a ‘T’. But when they set off, they can hardly predict the troubles that lie ahead with tow-ropes, unreliable weather forecasts and tins of pineapple chunks—not to mention the devastation left in the wake of J.’s small fox-terrier Montmorency.

Three Men in a Boat was an instant success when it appeared in 1889, and, with its benign escapism, authorial discursions and wonderful evocation of the late-Victorian ‘clerking classes’, it hilariously captured the spirit of its age.[Goodreads]

My Kindle version helpfully lists the author as Jerome, Jerome K (Jerome Klapka), which I didn’t know. I promptly added it to my quiz question list (I put together the questions for a local quiz).  I’d never read the book, nor come anywhere near it, classing it with P G Wodehouse as things lesser public schoolboys rave about which are deathly uninteresting.

You probably know the book by reputation, and if you know more than me – three bumbling chaps who take a boat on the Thames and have some comic adventures – you may not be surprised by my comments.

The book was written and set in the last quarter of the nineteenth century, so still Victorian, although I had always assumed it was 1920s. In many ways there is nothing much that changes it from the time it was written right until the late 1950s, save for the writing style.  Perhaps it’s something to do with boating on UK rivers—just as I commented for Coot Club, for example.  I suspect there would be subtle changes in the attitudes of the protagonists if it were set later, but I’m not sure what.

adventures on the river

These three men aren’t really public schoolboys; they are the level below that—’clerking class’, effectively the same as my father—educated, but not ‘destined for greatness’.  But they are great fun, and the adventures on the river will be recognisable to modern day boaters, even though the days of towing a row boat five miles up the Thames before supper are long gone.  Few have the ambition to do any physical activity by man-(or woman-)power that would see them reach their destination five miles away with only just over an hour of daylight left (hardened hikers excepted, Douglass family!).  When you think of the difference between physical expectations of then and now, and compare the calorific intake each day, it’s hardly surprising we are so much bigger. Unsurprisingly, food (old fashioned English fare) features large in the story.

The stories are entertaining, the amount of comic value that can be extracted from packing ones bags extraordinary, and once I relaxed to enjoy it as a historical novel (rather than a classic piece of literature), I thoroughly enjoyed it.  There are also some very useful commentaries on bits of English history that unfolded on the banks and meadows of the river.  If your history is a bit rusty—that’s good fun.

Need something light and entertaining that give you a snapshot of past, simpler lives? This is it. Delightful.

3 thoughts on “Classic Book Review | Three Men in a Boat”