My reading challenges are already one quarter of the way through.  Three months has flown by, but I have read a lot of books: Goodreads tells me it’s now 16 and I’m five ahead of schedule. I’m not sure how that works out, since one quarter of 52 is 13, but still.

You can see how I’ve done if you check each challenge from its drop down ‘Challenges’ menu above, should you be interested. But let’s just do the stats bit.

This is the one where I read five books a year for ten years to get through fifty in all.  So far this year I’ve read one, Clare Balding’s biography (review 14th April), which I got for Christmas.  It was very enjoyable, but if you don’t like horses, it got a bit samey towards the end of her teens. The things she got up to while at school though!  Shock – one of the UK’s National Treasures was a naughty schoolgirl!

I did not count the Pocket Guide to Iceland in my non-fiction adventure.  I skimmed most of it, and anyway, I wouldn’t recommend it if you’re going on an organised visit.  Maybe a stopover…

Maybe now I’ll finally get around to A Brief History of Time, though.  It’s been on my shelf since 1990. 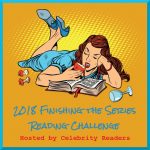 This is going well.  I’ve read more books from four series already.  Most of those had another book added since the start of the year, so net progress is zero. Although one of them, Pismawallops PTA, is now up to date, so that series is officially ‘finished’ from the POV of this challenge.

I wish more of these titles gave me help with my Alphabet Soup. They have nearly all been on my TBR List for ages, though.

I filled in some titles to remind myself that I had them, although they don’t necessarily become my entries (unlike the ‘official’ TBR challenge).  Like many people I keep finding myself reading books with letters I’ve already ‘got’.  G seems to be the pick of the year, along with S, T and D. Those always seem to turn up when you least want them 😉

I’ve read nine of the 26 letters, and finished Y last week.  I was thinking of leaving that to fate, when the A to Z Challenge turned up Y on a Saturday, so I had to find something fast.  I had no Y’s on my TBR list, and the only one on my bookshelves (only ONE!) was my least favourite of the Patrick O’Brien Aubrey-Maturin series, the Yellow Admiral.  Still, I enjoyed rereading it.

This one, new to me, is going splendidly.  It’s very kind of them to include crime, mystery, thriller and suspense, since that includes a load of things, not just detective novels.  Most of my series reads qualify.

I went for the first level, Amateur Sleuth, at 5-15 books, and so far have finished four.  With three Elly Griffiths to read to catch up with her series, and two Falcos, I reckon I’ll be onto the next level before the end of the year.

Since books only had to be on my TBR by 31st Dec, I was able to include all the Net-Galley books I added before Christmas that had January & February publication dates.  So it’s been pretty easy, especially when I didn’t push to get hold of new bookclub books.

I was particularly pleased to read Daemon by Doug Dandridge, on my list since Jan-13.  For those of you that read my Down the TBR Hole posts, Daemon was one of those that could have been dropped, had I not already got it on my Kindle. This was a brilliant book, and got 5 stars from me. You’ll hear more of it, obviously.

I’ve just got through the first 12 on my way to 36 this year, which means I’ve scaled the first level.  Must stay away from Net-Galley.

It’s no more official than any of the others, but it requires books on my TBR list for over a year (by 31 Dec 2016).  It also makes you commit to a list.  Sometimes I’ve looked at my list and wished I’d picked something else, but…

I’ve read four out of twelve, and thoroughly enjoyed them all.

So far, so good. Alphabet Soup will be my biggest challenge. Whether I keep up the rate of reading when it gets around to sunny days in the garden or on the golf course is another matter.  I need to keep my garden looking tidy this year. No time for slacking!