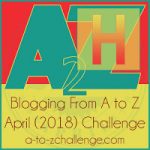 Hickling Broad and Horsey Mere combine to make an area in Norfolk that inspires my ‘marsh’ for my Princelings of the East series of books.  And since my A to Z Challenge theme is ‘my writing inspiration’, I thought I’d tell you more about them.

The Marsh in my books

I wrote the original opening of the first book with a sweeping view over the marsh, flying into towards a castle on a rock, with towers at its corners. Then it zoomed in to a window in one of those towers, where a princeling gazed out.  The princeling was Fred, and he was Thinking.  Then I read all the advice about the opening line of your book. The finished book opens with George scrabbling for a hold as he wriggles through the trapdoor into the room, trying not to disturb Fred while he’s Thinking.

I apologise for the capital T.  It was one of those hangovers from older times, and tries to give the reader to understand that for Fred, Thinking is a Very Important Activity.  Very A A Milne, in fact.  Nowadays I find it irritating.

This isolation in the middle of the marsh, and the general geography of the princelings’ home castle, is important.  There is something about isolation, whether on an island of the coast of mainland Europe, or on a rock in the middle of a marsh, that does something to your mindset.  For instance, I assume that holidays involve crossing water, or at least paddling in it.  I assume that every Brit has been in a boat. There is also a level of independence that sometimes rears itself in ugly ways, but I’m not going to use the word Brexit here. This is my blog, after all.  But I thought you’d like a little more about the Broads National Park, and the miles of reedbeds that seem to make it up. 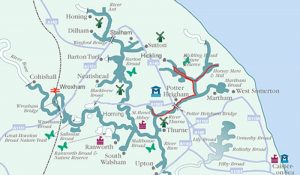 The Broads National Park is a network of shallow lakes connected by rivers, in the flat land that straddles the Norfolk/Suffolk border.  Originally it was marsh, providing reeds that made thatched houses, fences, and even beds for man and beast.  Norfolk reed is still much prized but it’s expensive (all cut by hand on a sustainable basis).  A ‘broad’ is the term for the lakes, which were formed from peat-cutting in the eighteenth century, the peat being dried and used for fuel, both locally and export to cities.  They are most on natural rivers, but some are connected by ‘Cuts’, as with the picture of me steering a boat along the Horsey Cut (between Horsey and Hickling) in the 1980s.

Hickling is one of the largest Broads, and the village of Hickling borders the northern tip.  The Norfolk Wildlife Trust owns much of the Broad; I took some of the pictures below on a boat trip with my bird society.

Travelling by boat is the best way to see the broads, although you do see a LOT of reeds!  That means you also get to glimpse, if you’re lucky, some of the reedbed species of bird, bearded tit (related to the US chickadees), reed warbler, reed bunting (pictured), marsh harrier, bittern, grey heron, and a locally re-established group of common crane. Mammals like otter, water voles and dormice sometimes emerge and disappear with a splash or more likely a ‘plop’ as soon as they see you.  Sailing boats have the edge over diesel motors here – and the reserve introduced electric boats for its conservation work and trips. 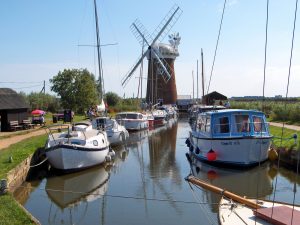 Horsey Mere is the first place I experienced a night aboard a sailing boat, in the middle of a wild place, with stars above and no lights to speak of.  So it holds a special place in my heart.  Horsey also has an excellent windmill (more correctly a windpump, as its original purpose was to pump water for drainage).  This is a local landmark, visible for miles, and open for visits and tours (National Trust, fee charged).

I generally think of these places as being in a sea of reedbed, but recently I made a trip up to a viewing platform at the edge of Hickling Broad.  That showed me how much the trees had grown in the ditches, and how much grazing land had taken over from reedbed (view from height in pictures; Horsey mill is in distance right).

That view of the changes in land use gave me ideas which feed into the last books of the series.  These have been hinted at in some flash fiction stories, and in interviews with the characters.  Those same interviews use inspiration from my letter tomorrow, for I, so come back and see!

I’ll just finish with an excerpt from the end of the third book of the series. I did one of those ‘echoes’ of the start of book 1, then never changed it when I changed the start!

The wind whistled across the marshland and the ice cracked in the reeds. A young princeling, George by name, gazed from the tower out at the reeds stiff in the breeze. He thought they would never have done much wind mapping if they had started it in winter. He sighed and turned back to the room, where his brother Fred was getting in a flap in a most unphilosophical way.

What places inspire your writing?  How do you portray them?

H is for Hickling and Horsey #AtoZChallenge 2018

5 thoughts on “H is for Hickling and Horsey #AtoZChallenge 2018”