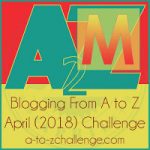 My Animals and Other Family is a clever play on the title of a Gerald Durrell book, for which the author got permission from Durrell’s family to use. The author is Clare Balding, a UK National Treasure. She went from amateur jockey (leading lady amateur), to racing reporter, to TV sports reporter, to Olympics anchorwoman, to presenter on all sorts of interesting programmes.  Suffragettes, hill-walking, dog-training (oh, she anchors the Crufts Dog Show reporting, too).  And… she was a Very Naughty Schoolgirl!

This is Saturday, which is book review day on my blog, and M is the letter of the day for the A to Z Challenge, so it all fits together nicely. My Animals and Other Family also gives me an M in my Alphabet Challenge, and my first non-fiction challenge ‘tick’ of the year as well.

My Family and Other Animals 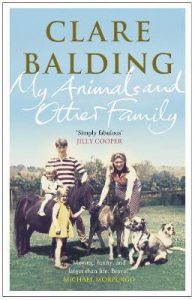 Clare Balding grew up in a rather unusual household. Her father a champion trainer, she shared her life with more than 100 thoroughbred racehorses, mares, foals and ponies, as well as an ever-present pack of boxers and lurchers. As a toddler she would happily ride the legendary Mill Reef and take breakfast with the Queen.
…
The running family joke was that “women ain’t people”. Clare had to prove them wrong, to make her voice heard – but first she had to make sure she had something to say. [Goodreads, abridged]

I’ve been a fan of Clare Balding for quite a while.  I’ve been a fan of horses even longer.  Much longer, as it turns out, since she is considerably younger than me, although somehow her upbringing seems to belong to my era, since the ‘upper classes’ were about twenty years behind your average suburban kid in terms of exposure to modernity.

Clare comes from an in-between world, where her father works all hours and is paid by extremely rich people to train their horses to earn them zillions more money. (NB. The quickest way to become a millionaire in racing is to start as a billionaire). Yet they don’t themselves have much, and what they have goes in keeping up appearances. While Clare has a series of ponies to do pony-things with (I could do that once a week, on Saturday mornings, and my brothers thought me spoilt), she has not much else. Certainly not attention from her parents. She’s too posh for the local school and too poor for the boarding school she attends as a teen. It’s a fascinating insight into the class structure of England.

She tells with disarming candour how she was led astray, into shoplifting and missing school.  Fortunately her teachers spot the talent within her and move her away from the bad influences.  I wonder what careers those bad influences had.  Are they crashing through the glass ceilings in the City? Did they marry well and now farm out the kids to a succession of nannies?  Clare’s desire to be part of the ‘set’ and uphold the loyalty she has misguidedly given them reflects the values her parents gave her as a child, and nurtured through her relationships with dogs and ponies.

Some may find the structure of the book: dog/pony and the growing up she went through with each, somewhat odd. With some of the animals there is little to tell, a sort of bookend for the main events.  With others, she lovingly discusses the trials, tribulations, adventures and sadnesses she experienced with them. To someone who holds a mental image of that part of the country (western Berkshire; rolling chalk downs and small towns), it captures its essence perfectly.  Clare uses words in print as fluidly as she uses them in live television; she captures the moment brilliantly.

I was pre-disposed to enjoy it, but even I found the later chapters, about her racing career, a bit tedious.  I got the impression she did too!  It had to be told to get to the end. I wonder whether a further edition will come out in later years, about all the adventures and controversies she’s had since. But as an insight into the youth and times of a very particular family, it’s fascinating.

Not a book for everybody, but people who admire her work, or who were pony-(or dog-)mad, will probably enjoy this as much as I did.

What about you?  Did you have companion animals when you were growing up? How important were they to you?

M is for My Animals and Other Family #AtoZChallenge2018 | Book Review