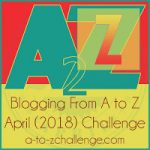 Zoology: the scientific study of animals esp. with reference to their structure, physiology, classification and distribution. [Concise Oxford Dictionary]

We end this year’s A to Z Challenge with a quick look at the way animals have inspired my writing, not so much as characters, but as species on which to base my aliens, extraterrestrials and other inhabitants of the universe.

I am very grateful for my Biology teacher: she did not insist we all dissected frogs. Those of us who didn’t want to were allowed to study in the library for that lesson. If I’d done it, I’m sure I would have had a much clearer understanding of what it takes to be a vet.  Maybe I would have got over the idea of cutting into the skin and been a good vet, but since I don’t even eat meat, I doubt it.  I prefer to nurse my animals, using my knowledge of husbandry and appropriate pharmaceutical interventions (what painkillers to use) and let the professionals do the surgical work.

But I am very interested in what goes on.  How animals work, the differences between their structures, the adaptations for different habitats and climates, those interest me. That falls well within the zoology bracket. Fortunately my cover illustrator, Dani English, has a similar interest, and draws the most amazing dragonlike creatures.

What is even more interesting, from a writing point of view, is what can happen when animal illnesses jump from any species to humans—and that is what zoonoses are.

I discovered the word zoonoses when I was working in an environmental research area, and saw the headline in a government department circular.  Having no idea what a zoo-nose was, I read on.  Subsequently, I realised that the word is zo-ono-sees, the plural of zoonosis, which derives from the latin for animal+illness.

The pronunciation of zoology (and all the other zoo words) gets purists in a spin. The animal + study should be zo+ology, and that pronunciation is specified in the dictionary, even though nearly all of us say zoo-ology.

So, I use zoology in my science fiction writing for aliens, and also for plot issues.  My vet has been enormously helpful in picking out little differences in the way, for example, mammals and reptiles are treated during operations.  Obviously giving oxygen to a mammal helps it breathe better.  Give it to a reptile and it’s more likely to stop breathing, since its brain then determines it is in an oxygen rich atmosphere, and will absorb more through its skin.  I’m still waiting to use that snippet of information, so please don’t steal it yet!

The end of this year’s Challenge

So that’s it for another year, save for the Reflections post next Monday.  I think I’ve enjoyed doing these inspiration posts more than any I’ve done before. But I haven’t had enough time to visit many people, and some weeks I’ve not even kept up with my replies to your comments, for which I apologise.

If you want more daily posts, then come back in June for #30DaysWild, which is where I’ll blog about doing wild things as part of a challenge from the UK’s Wildlife Trusts.  There’ll probably be many days with just a photograph.  Like some of my friends, I’m thinking of changing the way I blog.  Maybe it’ll be both easy on me, and more enjoyable for you!

Meanwhile, I’m dedicating this April to Midge, who left us suddenly after a stroke or fit, possible caused by a brain tumour. And all this while we thought it would be the sarcoma on Percy’s jaw that would carry him off first.  Live long and prosper over the Rainbow Bridge, dear heart.

Z is for Zoology and the end of the #AtoZChallenge2018