Fortunately Chuck Wendig’s flash fiction prompt this week is to write a story of revenge, which gave me the idea of beginning with something that led to the start of the end.  Or something like that, anyway.  I did toy with the idea of making it more of a cryptic clue, like Endgame being the start of it, but my brain started hurting, so I stopped.

The End is in the Beginning

She carved the roast pork, watching the juices flow into the dish beneath, thanking the animal who had given its life. Three slices on each plate, handed round to the kids, who piled into the vegetables.

Her gaze lingered on the carving knife. Just the right tool for her ex.

While we’re talking about Flash Fiction, I’m pleased to tell you that I’ve had one of my flash fiction pieces accepted by the Third Flatiron Publishing for their forthcoming anthology:

“Galileo’s Theme Park” –   Space opera, SF, physics. The great Italian scientist is famous for standing up for science in the face of the Inquisition, doing his best work while under house arrest. He also brought us our first views of Jupiter’s moons by combining a convex lens with a concave one to invent a high quality telescope. We invite you to take us on a journey to the lands beyond Earth revealed to us by Galileo and other space scientists.

My entry was “Titan is all the Rage” which I originally wrote as a response to one of Chuck Wendig’s calls for titles from his followers. I’m not sure how to acknowledge the originator of the title, but the story and the work on it is all my own!

Galileo’s Theme Park is due for publication on June 15th.  I’ll give you more as soon as I get it…

You can pre-order on Amazon here: www.amazon.com/dp/B07D5LVSBX

And here’s the cover 🙂 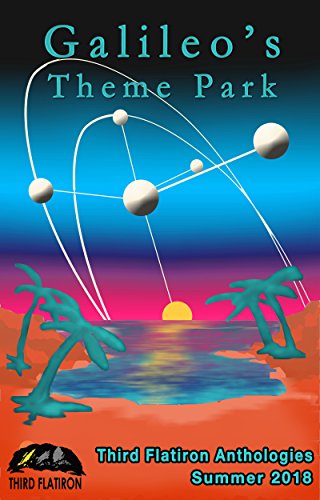 FridayFlash #Fi50 Fiction | The End is in the Beginning