Shadows from the Past is an MG historical time travel mystery suspense adventure series by Wendy Leighton-Porter.  Wendy has won several awards in the last year. These are thoroughly deserved, as it’s an excellent series, which gives you a real sense of the time periods the kids are visiting. I’ve been hooked on it from the first, when we all started writing, and met each other through the BookElves project. Max the Cat is a major protagonist of the series, and now has his own spin-off books!

I started to catch-up as part of my ‘Finishing the series‘ reading challenge, and reviewed the Shadow of the Norman Arrow in March.  I went on and read the latest after Easter, so I’m doing a double review here.

But it’s timely.  If you’re looking for some reading to entertain your 8-12 year olds during the Half Term break, you can download a FREE Kindle copy of The Shadow of Atlantis. It’s the first book in the Shadows from the Past series to be republished by Silver Quill Publishing. Be quick though, as this special offer ends tonight (26th May)!

The Shadow of the Two Princes 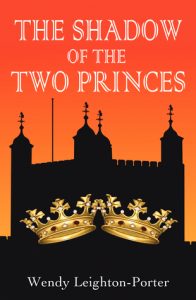 Book 8 in the Shadows from the Past series

Uncle Richard is kind and caring… isn’t he? Well, Joe and Jemima Lancelot think so. But for the two young princes imprisoned in the Tower of London it’s a different matter entirely – their Uncle Richard isn’t a nice man at all.

When the Lancelot twins travel back in time to the year 1483, they have a difficult task on their hands. Together with friend Charlie and their talking cat Max, they know they must rescue the princes from certain death at the hands of their wicked uncle – none other than the infamous villain, King Richard III. Is this a task too far for the intrepid foursome? Will their mission succeed or must they risk their own lives to save the two boys? [Goodreads]

I love the way these books stretch my historical muscle memory.  In the case of the Wars of the Roses, the brain has had frequent exercise recently. I saw all the Shakespeare Roses plays in order at the local theatre, plus my bookclub’s forays into such as the Red Queen.

This MG series is no less accurate, and every bit as visually acute.  In fact I would argue that it’s probably more accurate than Shakespeare; he notoriously wrote it from the Tudor (descendants of the winners) point of view.

In The Shadow of the Two Princes, Joe, Jemima, Charlie and Max arrive in a dusky and dismal London suburb, on the banks of the Thames.  Except there is no London suburb. The children are constantly surprised by going through tiny villages that are now just part of the metropolis.  I found this a little naive of them; I thought they might be more up to speed with how small London was in mediaeval times. The City of London is called ‘the city’ for a reason.  But maybe they haven’t been to the excellent Museum of London.

Max is his usual charming but cowardly self, and manages to play an important part once again.  The children land on their feet, finding the right sort of friend who overlooks their outlandish clothes (jeans) and sees an opportunity for them to help with his plans to save the princes.

Ms Leighton-Porter wrote this after the excavation in a Leicester car park.  Was it really 2012 when the bones eventually verified as those of Richard III were unearthed, disinterred and then buried with suitable pomp and circumstance.  So the children are fully aware of the stories, and eager to help.

I was delighted with the completely plausible way in which the disappearance of the king’s nephews came about. Whether Richard had such dire destiny for them as is usually imagined or not, this was the perfect explanation.

The Shadow of the Tudor Rose 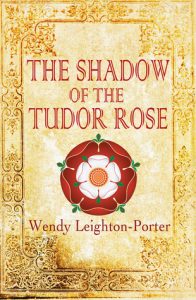 Book 9 in the Shadows from the Past series

In 1588, a plot to invade England and overthrow Queen Elizabeth the First is about to unfold.
At this crucial moment in English history, four visitors from the future arrive in Elizabethan London. Twins Joe and Jemima Lancelot, together with friend Charlie and their talking cat Max, have embarked on their ninth journey into the past as they continue the search for their missing parents who are lost somewhere in the mists of time.
Finding themselves at the heart of a web of conspiracy, can the young time-travellers solve the mystery of the Tudor Rose? [Goodreads]

We skip forward only a hundred years, but London has changed entirely.  Well, it’s not that much bigger, but it has got much more crowded, and the filth… well, let’s just leave that to the imagination.  This is a more complex plot than the last one, involving multiple strands of story all intertwining in and out of Queen Elizabeth’s court.  I was slightly irritated by the kids calling her Queen Elizabeth the First. I really felt they were bright enough, especially after all their travelling, to realise that they shouldn’t call her that. But it could be that being much closer to home, and in more familiar surroundings, they let their guard down. Especially with people like Will Shakespeare around.

The author’s treatment of Shakespeare’s fame was very clever. It threw light on why there is so much doubt about the authenticity of some of his works.  It was extremely well written, the plot twisted more than usual, and my hopes and fears about certain parts of it (which must stay secret) were raised and dashed in equal proportions.

This is probably the only one of the books which relies on an author’s invention for a key part of the plot. But it was a good invention, and I praise Ms Leighton-Porter the more for making it seem as if it must be true.

Will there be another book…???  I’m not telling!

Book Reviews | Shadows from the Past series catch-up

Like Loading...
Tagged on: Globe theatre    historical adventure    London    MG    Princes in the Tower    Richard III    Shadows from the Past    Shakespeare    time travel    Tower of London    Tudor England    Wars of the Roses