Mondays are days most people blog.  I get a strew of emails from people I follow.  Okay, some of those are from posts on Sundays, but still…

Last Monday, someone changed my life.  To be fair, he changed several hundred, if not thousands of lives. 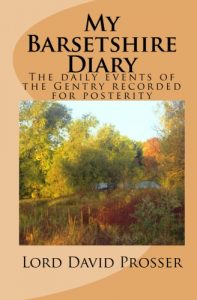 I suspect David Prosser started his blog when he first got the idea of writing the Barsetshire Diary.  From memory, I think he wrote the Barsetshire diaries online as a commentary on his and his wife’s life, but sparkling it up by imaging they were Lord and Lady Prosser.  Anyway, he published My Barsetshire Diary, which I’ve been meaning to read since about 2012, and followed it up with a further adventure which I read for my A to Z last year, the Queen’s Envoy.  It’s extremely funny, and I would love more.

I didn’t read through all his weekly blog posts at first.  It’s a diary, detailing his life, sometimes minute by minute.  If you believe blog posts should meet certain popular criteria, well, David’s don’t.  They start with Monday, usually at some unearthly hour of the morning, since David has trouble sleeping more than two hours a night.  Two hours might be a record, in fact.

You get to meet the family, and their family—I know I was reading avidly by the birth of the last one. She is now at school, or at least at nursery school.

David gives a lot of medical detail, adventures with buses that don’t run, and more detail about tablets needed for tablets that produce side-effects.  You get some messy detail about wounds that don’t heal, too.  In fact, if you’re squeamish you sometimes have to look away.

Here’s a sample from last Monday:

First job was the washing, then once that was going on quickwash I took my inhalers,took my tablets and filled my mug with milk. There was just enough in the milk carton for my mug so I turned to the sink to wash the carton out to add it to my recycling bag. Oh hell, there’s a spider in the sink and I don’t think he’s too chuffed that as I moved the bowl he was caught in the glare from the light. I had to fight my natural inclinations and kind of caught him in the trifle bowl from last night. I had to keep moving it so his feet couldn’t get purchase as I walked to the front door, opened it and tossed him out of the bowl into the garden. If he happens not to be an outside spider then it’s a case of hard luck. I shut the door, returned to the kitchen and put some bread in the toaster. Now I’ve seen Harry Potter and I know Aragog was a very rare spider raised by Hagrid, I just has to hope he isn’t pissed off enough with what I’ve just done to come and take his revenge. [barsetshire diaries 21 May 2018]

After a day’s worth you’ll get a photos or a link to a YouTube song or singer.  I’ve never clicked on the YouTube offering, but it’s often something from my past. I will get that on the brain for a few days.  Mamas and Papas especially.

I was all set last week to comment on his spider-catching technique. I was set to call it his spider-cwtching technique, since David is proudly Welsh. A ‘cwtch’ is a cuddle, sort of.  Then I noticed other commenters saying things about ‘last post’.  Scroll back to the end after the last picture and there he is, signing off and telling us he won’t be commenting or blogging any more.

The trouble was, there was no indication of anything that would lead to such a momentous decision.  Yes, some urine testing, pretty normal.  A birthday party was the last item of that week’s agenda.  Having missed Sue Ann Bowling‘s final exit after she transferred to a nursing home, I jumped to the wrong conclusions.

Of course we all respect what little privacy he kept from us.  But losing David’s ever-hugging presence will be hard.

… and the state of the world

As it happens, I now know why David stopped. He just felt it was turning into one long rant about the state of the world.

Since I think the only sane people are those who rant about the state of the world, I understand his feelings.  I don’t think turning it into a rant would put anyone off.  You should check out M T McGuire’s blog which has turned into a rant about her ‘adventures’ with her dementia-riddled parents.  If anyone needs to let off steam, it’s her.

But one of the problems with ranting is that it raises your blood pressure and may not even help you let off steam.

So, David, dear, I entirely understand.  I don’t even watch the news any more because I simply can’t stand it.  I tend to absorb all the major events by osmosis (often because someone is ranting about it).

But come back when you’re ready, and don’t worry about ranting.  We’ll be there on Mondays to smother you with…

Mondays will never be the same #blogging

15 thoughts on “Mondays will never be the same #blogging”