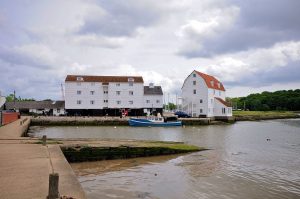 Why include Woodbridge Tide Mill in my 30DaysWild challenge?  It’s not a bird, or an animal, or even a tree.

I had to go to Woodbridge this week (for golf) so I slipped in a visit to the Tide Mill, and it’s well worth it.

How does a tide mill work?

Woodbridge Tide Mill is a water mill, with water turning the wheel that sets the machinery working. Instead of using the flow of the river Deben to turn the wheel, it’s the outward rush of the tide.

Tide mills are generally on slow-moving rivers where the tide reverses the flow according to the ebb or flow of the tide, so unlike non-tidal river mills, they can’t work all the time.  Both the tide mills I’ve visited (I’ve also been to the one at Eling, near Hythe, Hampshire, many years ago), have a tide pool.

According to the Curriculum Resources Pack pdf from the Woodbridge Tide Mill website:

The pond at Woodbridge was just over 7 acres, and as the tide came in the pressure of the water opened the sluice gates in the bank and filled the pond. As the tide began to fall, the first water leaving through the sluice gates actually closed them. The weight of the trapped water kept them closed. Then when the tide had gone out sufficiently and there was no tidal water under the great water wheel, the miller opened the gates by the wheel and the water rushed out and turned the waterwheel. The gentle lapping of the tide coming in or going out would not have turned a great wooden wheel. It needed the greater force of the trapped water falling against the water wheel to turn it, allowing the mill to work for two hours each side of the low tide. 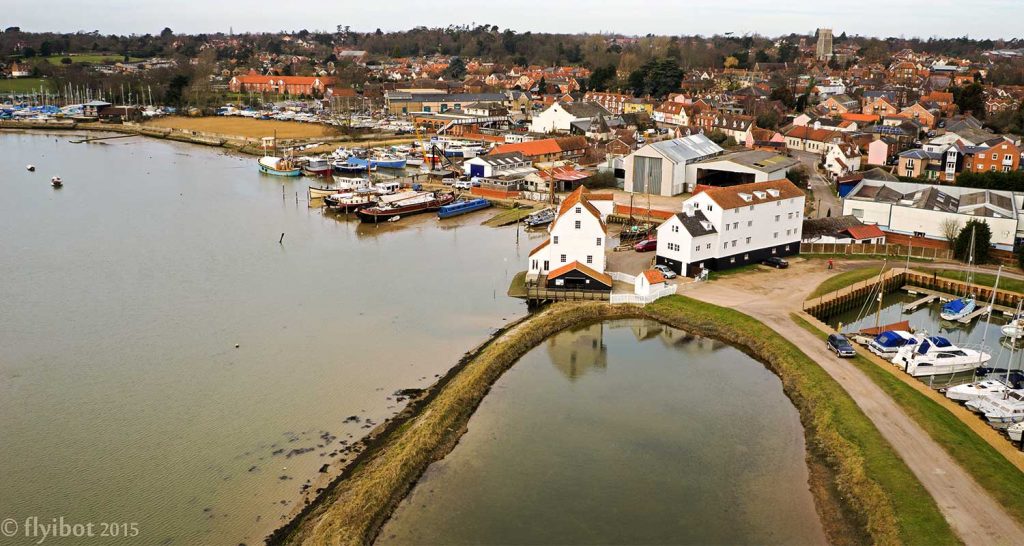 Tidal circulation around the UK

I don’t think I need to explain to you about how tides come about, but you might be interested in the differences in tides between the east and west sides of the UK. 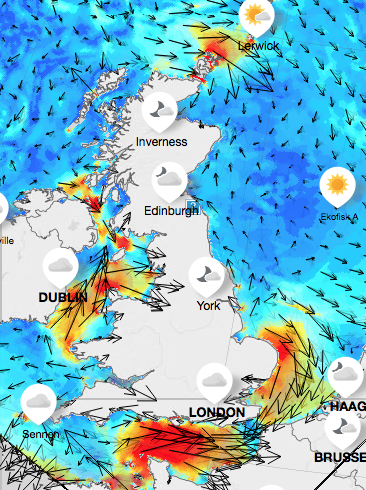 The rising tide flows up the English Channel between England and France, and into the North Sea on the east side of the country. While it does that, it also goes around the top of the north of Scotland and back down the east coast in the North Sea.  That is much further, so there are interesting properties of the North Sea that govern tides, where they meet, how the changes in water flow go, where the centre of the circle that they make forms, and all that, which I’m not going to go into.  The net effect is to have a tide coming down the east coast of England, which is not generally of large tidal range, but is still quite useful when it comes to tidal power.  The tide just comes in apparently slower than it does on the west coast. It also tends to seep in through estuaries and mudflats rather than dash in against rocky headlands.

The majority of surviving tide mills in the UK are in Suffolk, Essex and the south coast, with a couple in Pembrokeshire.

There this a fun simulator of the tide circulation on this Norwegian website. I took the screen shot from it.

UK used to be leading in research into tidal power, since we had such a lot of it.  Then in the 1980s Mrs Thatcher withdrew all funding for it.

The last twenty years has seen a frantic rush to catch up, and despite many other countries (especially Scandinavian) doing great work in the area, the UK now has several tidal power trials around the coast.  The island of Islay was going to put in a small tidal barrage when I was researching this in 2003, but I don’t see any references to it.  Tidal barrages tend to be unpopular because of the effect on the estuaries and wildlife that depend on the tide for their food.  UK also has several of the world’s concentration hotspots for various wading birds.  However, new research tends to take the approach of floating rollers to turn with the waves, or to hang turbines below them to turn with the upper currents to generate electricity.

There’s not enough funding going into it yet, though.  Same old story, really.

This was an excuse for a minor rant and a day trip to Woodbridge as part of my #30DaysWild challenge.