A Brief History of Time is widely cited as the most bought but unread book in the world.  I suspect that’s an exaggeration. However, I can announce that the number who have it unopened on their shelves has decreased by one.  I have read it.  And understood most of it.  And got some ideas for my scifi from it, which is even better.

My copy is dated 1988, a third reprint.  I got it as one of those book club offers, which used to offer some amazing books at ridiculous prices, but committed you to take one book a month for a year afterwards.  I remember having great difficult finding any books I actually wanted after that opening offer, but I still have some of them.  The Readers Encyclopedia (unopened) is one.  Maybe it’s the same as ebook bundles now.  Will I read half those books now on my Kindle?  Well, at least they take up less space.

A Brief History of Time: From the Big Bang to Black Holes 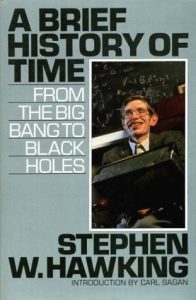 Stephen Hawking is one of the world’s leading cosmologists and is widely regarded as the most brilliant theoretical physicist since Einstein. Although he has been widely published within his specialized field, A Brief History of Time is the first work he has written for the non-mathematical layman. In it he explores the outer reaches of our knowledge of astrophysics and the nature of time and the universe. The result is a revelation: a book that not only serves as an introduction to today’s most important theories on the cosmos but affords a unique opportunity to experience one of the most imaginative and influential thinkers of our age. [goodreads]

The Goodreads blurb is the same as that inside my book’s dustcover.

It’s a clever title.  Much of the book does not appear to be about time except in the sense that it exposes how humans have viewed our planet, its place in the great scheme of things, and the search for rules governing how it works.  Time only comes into it later, when, mind-blowingly, imaginary time is introduced. It’s something that could help us understand how the vastness of science and the minuteness of science could actually be worked out together.  The relativity theory seemed incompatible with quantum mechanics, and vice versa.  Until some clever chap (or chapess, but probably a chap, from sheer weight of numbers) had the idea to use imaginary time just as imaginary numbers (based on the square root of minus one) made it easier to solve all sorts of other problems.

Imaginary time might solve some of our problems with the concept of faster than light travel, and the scifi writers’ dilemma over time dilation.

But back to the review.

I enjoyed the way Stephen Hawking, later Lucasian Professor of Maths at Cambridge, held our hands through the history of various scientists, or philosophers” attempts to understand the world we lie in.

I have several books on the history of science, and this was a refreshingly easy to read version, until it fell into the trap it described in advice to a professor asked to teach grade level maths.  Start easy, introduce more complex things, and end up with something excitingly new, to paraphrase. “Yes,” said the professor.  “And what do I do in the second lesson?”

Stephen Hawking starts several expositions of his subject with simple concepts expressed in the simplest of terms for the layman.  Three sentences later he is talking about his own subject using very long words strung together. Some of these I recognise, but take three or four readings to grasp.  For all that, it only takes me three or four readings. But… I have a maths degree (I didn’t understand that, either, but I knew when to learn things by heart). I read astronomy and scifi books, and I try to keep up to date with scientific developments.  Many readers must get to the point of struggling.  I suggest parking the not-quite-understood and continuing, as the process continues, and each time your understanding gets to a new level.

Some of the diagrams and sketches are extremely helpful.  I now understand much more about spaghettification. By the time I’d finished the book, I reckon that my space travellers enter imaginary time, so they don’t get completely spaghettified.

If, like me, you were at school when the geology model was Continental Drift. You have now caught up with Plate Tectonics. You owe it to yourself to update your special relativity into general, and quantum into string theory.  I had heard the term, and I now have a little more idea of what they are talking about.

So, this book will bring you up to speed with physics of the 1980s.

Now to find out which book will help me understand dark matter (already a ‘thing to study’ in 1988), Buckie-balls, and several other buzzwords.  I suspect one of the books already on my shelf may help…

Yes, I do recommend A Brief History of Time to you. You’ll already know if you really don’t want to read it!

It has to be essential reading for scifi writers. And if you are a writer who delights in adding exclamation marks, it will probably cure you of that, too.

On page 137 is a paragraph describing the ‘sum over histories’ concept to describe everything in spacetime.  What that basically does is allow for every parallel universe that we writers have ever invented—and more.  Speculative fiction justified!

14 thoughts on “Book Review | A Brief History of Time”