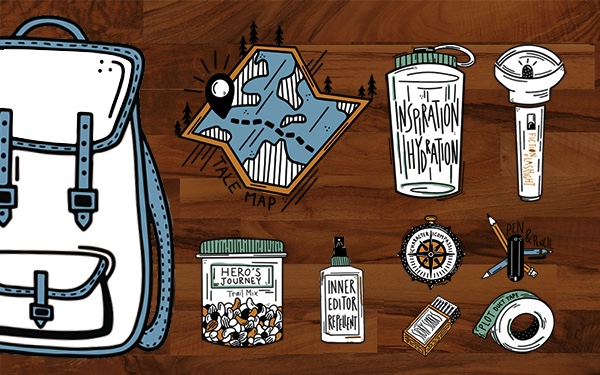 Restructure: that’s the subject for my second postcard from camp this year.  As you know, I’m editing Curved Space to Corsair so that I can send it to be properly edited. At last. This is the second in the Viridian System series.

I was up to around chapter 14, when I decided to split the chapter into two.  I had already been unhappy with the various strands in the story intertwining.  Even I was getting lost… not a good sign. A restructure was definitely needed.

I recall a hint my tutor at college gave me when I was working on my dissertation: it should be like an hourglass.  Lots of broad strands leading to a focal point, a key question, then deal with that question and broaden out again.

Well this book has several important events but only one key one, when everything that the characters have done so far changes and they hurtle onwards to their fates.

So I decided that rather than faff about trying to make my twisting and turning threads make sense, I should gather each together, and give it room to expand in one chapter.  Well, maybe for the timeline I’ll have to handle a couple alongside each other, or at least group them so the reader knows where they are and who they are with.

I remember one of the criticisms of The Perihelix was that readers wanted a map to keep up with where they were.  I can’t do a three-d map of the galaxy for you, but I can make it clearer if I have events in the same sort of place taking place together, before moving back to another place, and seeing what’s happening there.

Part of the problem was introducing the strand including my opera singer. She’s a key secondary character because she connects several important characters. I think her story works… or will do when I’ve finished the restructure.  Here’s an early meeting with her.

Margo McLachlan bowed to the audience as the applause and cries of appreciation rolled around the dining room. For an impromptu concert venue, the acoustics were impressive. She suspected someone had set a resonance field to imitate the effects of a much larger space. Margo had played many of the theatres of worlds in the inner galaxy. She gestured to her accompanist, who took her own bow, then strolled off to the curtained banquette for some privacy.

“You keep yourself well-tuned.” Baldstone handed her a glass of champagne, but she reached for the water and poured a wineflute full. He sipped from the glass himself instead.

“In all ways, as you should realise by now.” Three days on the spacecruiser had given them ample time to explore various forms of exercise, as well as plan their next move on V’iola. “And one must also practise. S’cala have confirmed my billing in the festival the day after we arrive. They are ecstatic that I fit them into my schedule.”

“Does no-one ever suspect?”

“My dear, I am known for my impromptus. Given two days notice, anyone within reach of a venue will get there. Part of the excitement is the tension preceding an announcement. It keeps them alert.”

“Surely many people miss you?”

“To their eternal loss. It heightens expectation of the next appearance—who knows where or when it will be?”

Baldstone shook his head. On the rare occasion he attended live entertainment, the appearances had been known for months, a whole tour was public knowledge. But then, diamonds were found in unexpected places.

He listened to the gossip and the music playing outside their secluded corner. Margo hummed along, relaxing her vocal chords. At one point she stood up and made some extraordinary contortions. She sighed as she sat down.

“There. I shall make everyone even happier with a short tour of the room. A light supper afterwards, if you could arrange it?”

She smiled at him and slipped out from the niche, her head imperious as she gazed over the assembled passengers. About half of them had stayed. She wondered how many would change their plans when she alighted at Lyra, in hope of catching a full performance.

Baldstone beckoned to a waiter and ordered for them both. She was infuriating, but good cover. And when she was not performing, she was good company. The brain that held a thousand arias and roles also memorised schematics and technical details. She also had a sense of the practical response any organisation would make to disruptions. She was an invaluable part of his team. [Curved Space to Corsair, in prep]