Behind the Beautiful Forevers is my bookclub book for July. I’m not sure I’m going to complete it before Monday’s meeting, as I have another book to get feedback ready before the month end.  But I am three-quarters through as we stand, and I think I can give a fair review.

Behind the Beautiful Forevers: Life, Death, and Hope in a Mumbai Undercity 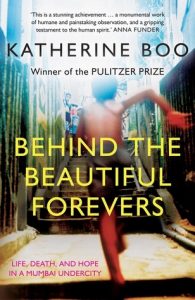 From Pulitzer Prize-winner Katherine Boo, a landmark work of narrative nonfiction that tells the dramatic and sometimes heartbreaking story of families striving toward a better life in one of the twenty-first century’s great, unequal cities.

In this brilliantly written, fast-paced book, based on three years of uncompromising reporting, a bewildering age of global change and inequality is made human.

Annawadi is a makeshift settlement in the shadow of luxury hotels near the Mumbai airport, and as India starts to prosper, Annawadians are electric with hope. Abdul, a reflective and enterprising Muslim teenager, sees “a fortune beyond counting“ in the recyclable garbage that richer people throw away. Asha, a woman of formidable wit and deep scars from a childhood in rural poverty, has identified an alternate route to the middle class: political corruption. With a little luck, her sensitive, beautiful daughter—Annawadi’s “most-everything girl“—will soon become its first female college graduate. And even the poorest Annawadians, like Kalu, a fifteen-year-old scrap-metal thief, believe themselves inching closer to the good lives and good times they call “the full enjoy.”

But then Abdul the garbage sorter is falsely accused in a shocking tragedy; terror and a global recession rock the city; and suppressed tensions over religion, caste, sex, power and economic envy turn brutal. As the tenderest individual hopes intersect with the greatest global truths, the true contours of a competitive age are revealed. And so, too, are the imaginations and courage of the people of Annawadi.

With intelligence, humor, and deep insight into what connects human beings to one another in an era of tumultuous change, Behind the Beautiful Forevers carries the reader headlong into one of the twenty-first century’s hidden worlds, and into the lives of people impossible to forget. [goodreads]

I’ve given you the full blurb for Behind the Beautiful Forevers, because I couldn’t work out where to cut it so it makes sense.  It’s a bit like the book. I couldn’t quite work out whether this ‘narrative non-fiction’ was made up or not.  It may well be brilliantly researched, but did all these things happen in the sequences described?

Or is it faction?

Later trips have been far more interesting, locally run, and with local guides.  Maybe they take you to what you want to see, but there is more to India than beggars, rich people in high-tech industries, and do-gooders.

pollutant of the month

If you have seen the film Lion (as our book club did), you will have some preparation for the nightmare that is the slum of Annawadi.  If you’ve seen Slumdog Millionaire, you also have a little preparation.  The author’s writing and creation of atmosphere through vivid description is first class. The sequences are beautifully written, whether of the sewage lake and the changing colours of the water depending on what the pollutant of the month is, or the beating of the child suspects in the police station. The word choice contrasts with the ugliness of the situation.

The author has a way of summing up the political and baser human behaviours in such a clear nutshell that you wonder why you hadn’t seen it that way before. It certainly gave me a big steer for something in my final Princelings books, something I’d been stuck on, and mainly because I’m a nice girl and wouldn’t think anyone would do that. But it’s what Trump is doing, and Putin, and Farage, and all the other people wrecking our lives at present. Making the problems so they can be paid to fix them. It’s a good definition of corruption.

I don’t think it matters whether I like Behind the Beautiful Forevers.  I think it’s a book that brings home how corruption and double-dealing affect us all at every level of society.  If we think this is about the slums of Mumbai, we are fooling ourselves.  Maybe humans really shouldn’t be allowed to be on this Earth any more.  I’m not sure whether this book leaves me more angry or more depressed.

Book Review | Behind the Beautiful Forevers

One thought on “Book Review | Behind the Beautiful Forevers”