Ringworld was a chosen book for July for the Space Opera Goodreads group.  I feel I should be reading and reviewing more science fiction, but I have to be careful it doesn’t mess with my own writing ideas.  This copy I bought from Amazon for my Kindle. 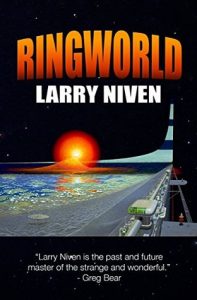 Winner of both the Hugo and Nebula Awards for Best Novel, RINGWORLD remains a favorite among science fiction readers.

Louis Wu, accompanied by a young woman with genes for luck, and a captured kzin—a warlike species resembling 8-foot-tall cats—are taken on a space ship run by a brilliant 2-headed alien [Pearsons Puppeteer] called Nessus. Their destination is the Ringworld, an artificially constructed ring with high walls that hold 3 million times the area of Earth. Its origins are shrouded in mystery. [Goodreads]

As far as I was concerned, I read this master of science fiction, an altogether unmissable classic, when I was in my teens or twenties, somewhere around 1978 or so. When I listed it on Goodreads, I gave it four stars, because I couldn’t actually remember the plot. I could with things like the Pern books, and Nine Princes in Amber, and Stranger in a Strange Land, and even Dune (which I loved at the time, but hated the sequel, and completely turned my back on Dune-mania, so that I wouldnt read it if you paid me nowadays).

Having read Ringworld again, I wonder whether I ever really read it.  It’s a little like H G Wells The Time Machine, which I read about five years ago now, wondering whether I’d really read it before, yet how did I know so much about the strange people in it?  Thus it is with Ringworld. In principle I remember the construction of a huge world around a star. In practice, I have very little in my memory, not settings, nor protagonists, nor events that occurred on the Ringworld itself.

Did I ever read it?

And yet… Louis Wu is very familiar, the rest of the crew and their alien species the same….

Old science fiction really does not travel well. The concepts of the time that were so innovative, so mind-blowing, have become tropes. They have defined the genre, and in doing so they no longer have what made them special. What is left is a story full of ribald sex from the ancient male space traveller, a female companion who fits all sorts of stereotypes, at least on the surface, and some aliens ditto.

Underneath that, though, is some really good characterisation. The aliens respond sensibly to their avowed traits—whether cowardice or extreme aggression. Louis Wu has ample time on this trip for a mental exploration of why people behave as they do. Is it nature or nurture? How far can people go, through the experiences and knowledge-gathering, to change their racial make-up. Through that sometimes chauvinistic meditating, I become more pleased with Teela as a character. She is not dumb, but she is lucky. Because of her luck, she has never needed to know how to handle herself in some situations. Street-savy she is not, because why would she need to be? She came to remind me of someone I knew who really was as polite, kind, and generous as she seemed.

So Ringworld not only has mind-blowingly complex world-building, it has complex psychology mixed in. I’m not sure we really need Louis Wu’s smug assessments to expose us to it, though. Although his thought-experiment leads him to expose a truth about the politics between the three races present which were maybe better not exposed.

not an action novel

Ringworld is not an action novel.  In terms of thriller, well, yes, it does have some exciting bits, just as the Tortoise and the Hare has some exciting bits.  It has some intriguing civilisations; when it was written, the concept of these ‘other’ civilisations turned the heads of many readers who had been trained to fear everyone outside their own country.

Now we have 24 hour exposure to every uncivilisation in the world, maybe we need these other people to give us hope that there really is civilisation out there.

Ringworld has aged, and not aged particularly well, but I reckon it’s worth a read for someone prepared for nothing much to happen for long periods.  It’s definitely interesting.  And that’s such a double-edged word.