The Way of All Flesh turns out to be a Scottish Gothic murder mystery. I received it from Net-galley as an advance review copy. I say ‘turns out to be’ because I found the blurb intriguing, which is why I picked it up.  It is due for publication on August 30th, although Goodreads lists that as October 1st.  It’s dark and gruesome, but not as scary as Lockwood & Co.

The Way of All Flesh 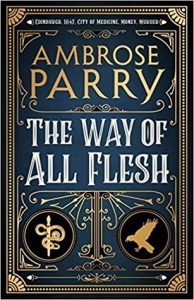 Young women are being discovered dead across the Old Town, all having suffered similarly gruesome ends. In the New Town, medical student Will Raven is about to start his apprenticeship with the brilliant and renowned Dr Simpson.

Simpson’s patients range from the richest to the poorest of this divided city. His house is like no other, full of visiting luminaries and daring experiments in the new medical frontier of anaesthesia. It is here that Raven meets housemaid Sarah, who recognises trouble when she sees it and takes an immediate dislike to him. She has all of his intelligence but none of his privileges, in particular his medical education.

With each having their own motive to look deeper into these deaths, Raven and Sarah find themselves propelled headlong into the darkest shadows of Edinburgh’s underworld, where they will have to overcome their differences if they are to make it out alive.

The Way of All Flesh is the debut novel from Ambrose Parry: co-written by best-selling crime writer Chris Brookmyre and consultant anaesthetist Dr Marisa Haetzman. [goodreads]

This is a fascinating story, full of horrendous detail about pre-anaesthesia medicine, and the complications surrounding the search for an effective solution. That underlies a well-constructed mystery, full of red herrings and blind alleys, as Raven tries to work out who is killing the poor girls, probably through illegal abortion practices.

Raven has plenty of reasons to get into trouble on the darker side of town. When he avoids it, it seeks him out. The man seems beleaguered from all sides, yet he conceals more secrets than the obvious ones we are presented with. It is Sarah who uncovers them, as she does most things.

Sarah is a housemaid with ideas way above her station, and well in advance of the Suffrage movement.  Her enquiring mind towers over many insipid young men learning to be doctors and other ‘professionals’. Yet she is stuck in the rut of cleaning, tending her mistresses, and running errands.  At times I found her slightly too advanced for her times, but maybe that’s me being unreasonable. As the book progressed, I found her continual gripes about her status, written purely for the reader, became tedious.  Was this a fault in the co-authorship approach?  Was someone being heavy-handed about one aspect of Sarah’s character? Maybe they did not realise that almost the same paragraph had appeared in an earlier chapter?

Generally speaking, the co-authorship was seamless.  However they shared the workload, it worked.  I did find the last quarter of the book to be somewhat dragged out, though. Perhaps this was the element of repetition, or too many clues that made Raven’s discovery more of an ‘at last’ moment to the reader.

There is plenty of atmosphere in this book: plenty of thick smoke of winter in Auld Reekie, and more than enough dead bodies and smells of decay in the dark side of the city.  It well-paced for the most part, with plenty of what appears to me to be accurate historical presentation of nineteenth century medicine.  I’m just so glad I wasn’t alive then to suffer it.  Recommended, but not for the squeamish.

Note:  This may be the first of an intended series.  I don’t feel inclined to follow it up, but that’s perhaps because there are so many books on my list to read.

Book Review | The Way of All Flesh by Ambrose Parry