The Jewel of Peru is book one of an intended MG series by Sharon Skretting, entitled The Ultimate Treasure Chest. I’ve taken the liberty of detaching it from its series name to fit in my Alphabet Soup reading challenge for J. I confess I’ve had this book on my kindle for four years, probably a free review copy as part of a MDBR review tour which I did as a book blast. Worryingly, the second book in the series does not yet seem to be out. Maybe Ms Skretting’s mojo got lost afterwards.

The Ultimate Treasure Chest 1: The Jewel of Peru 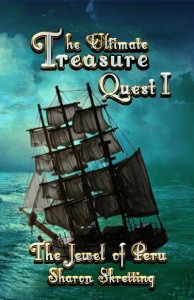 The Jewel of Peru is a magical adventure through time, taking young Captain Christopher and his loyal crew of orphaned stowaways on a perilous quest in search of Christopher’s missing parents.

After his father’s ship is found abandoned at sea, Christopher makes an unexpected discovery on board—The Ultimate Treasure Chest! Inside is a message that beckons him to set sail after the treasure and his parents. When a savage pirate and a corrupt businessman join forces to steal the treasure for themselves, the gang gets caught up in pirate chases, time travel, and an underground network of spies. Will Christopher find the Jewel and his parents, or will all be lost for ever? [goodreads]

It all starts so well; an empty sailing ship and a possibly orphaned young man with the courage to set sail to find his parents. A rag-tag bunch of kids from an array of backgrounds brought together by poverty and circumstances… and pirates! All seems set for a chase across the eighteenth century seas on a quest aided by magical devices, with adventures and swashbuckling galore.

And so it does, except that there is time travel involved. It’s a nice twist, eighteenth century kids arriving in contemporary Peru, and having to adjust to modern life. The trouble for me? It was all so easy for them. They took all the high-rise buildings, automobiles, and travelling by plane in their stride. Hardly a waver of ‘wooo, what is this magic?’ They did, however, need instruction on how to ride motor bikes. My first worry though, was the way they described the steel and glass buildings reaching to the sky. Glad you could recognise sheet glass, but steel??

So the kids in the Jewel of Peru were uncomfortably modern for me.

Their quest requires that they learn things as stated in a ‘riddle’ on the scrolls in their magic chest.  These are all about lifestyles and environmental impacts. Okay, I know a bit about environmental impacts, so this was intriguing and interesting to see how they handled it. Heavy-handedly, in my opinion. The scrolls virtually told them what to look for; a ‘Keeper’ escorted them through each stage of the quest volunteered the necessary information. They wrote it down on the scroll, which was put back in the chest to get the next clue. Note the repetition. Yes, kids, we are going to say this three times each time, so you get a chance to get it into your heads.

At each stage there is an environmental impact problem which needs saviours to help the locals. Since each Keeper gives Chris a magic stone, it soon becomes apparent that each episode is going to need the gang to solve the locals’ problem with the use of one or more magic stones. The solution to the over-fishing problem was simply dumping a whole load of magically produced fish into the sea.

At no stage was there any indication that these problems could be solved by anything other than by magic. This may lead to a discussion in the school classroom, but what is the independent reader going to think?

Ms Skretting is or was an elementary school teacher, so I’m sure she knows her stuff, including the best way to get things across to her students. It just seems a mixed up way to do it, to me. Some of the words in use clearly required a high degree of reading skill, so surely they could be encouraged to use their brains a bit more? But although she wobbled a little on the effects of altitude in different parts of Peru, her environmental problems were genuine and well presented, and the story ran along nicely, with suitable baddies in pursuit. The main baddie turns out a bit of a trope, but if there are further books in the series, I expect they’ll be readable.

With apologies for the very tardy review.

Book Review | The Jewel of Peru by Sharon Skretting